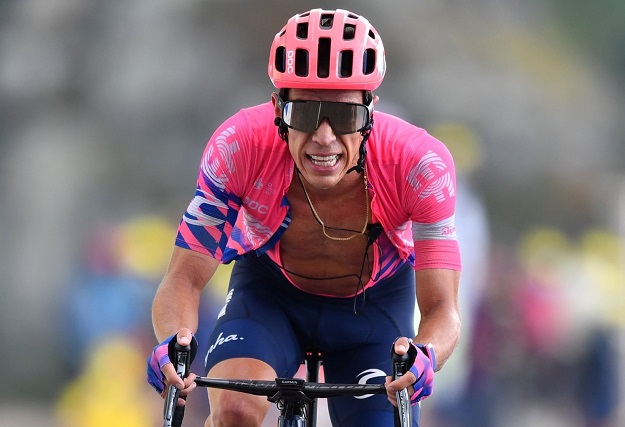 Rigoberto Uran held off Quentin Pacher and Jesus Herrada in a thrilling sprint finish to win stage 17 of the Vuelta a Espana.

You can rewatch STAGE 17 HERE

Overall leader Remco Evenepoel maintained his advantage on Wednesday though as he edged closer to a maiden Grand Tour title.

Herrada looked set to take the win with under a kilometre to go before Uran chased him down with 200m left. It was the 35-year-old’s first Grand Tour stage victory since 2017.

The Colombian has now won a stage in each Grand Tour – the Tour de France, Giro d’Italia and the Vuelta.

“It’s beautiful to win in the Vuelta. I’ve been looking for this for several years because I’d already won at the Tour and the Giro,” said Uran.

“I was (up) against some quick riders, I had to preserve some energy to ride against people like (Marc) Soler. At 300m to go, I said ‘I have to go now, it’s now or never.’ This win shows that we always have to believe and fight.”

Back in the peloton, Evenepoel never looked like relinquishing his red jersey despite a late surge from Enric Mas. The Belgian cashed in on the absence of main rival Primoz Roglic, who had been in second place.

Roglic, bidding for a fourth straight Vuelta crown, withdrew from the race following a heavy crash on the home stretch of Tuesday’s stage 16.

“Pretty tough, it was not easy at all. Especially the run-in was really nervous and also a big road going quite steep,” said Evenepoel, who leads Mas by over two minutes in the general classification.

The riders tackle the mountains again on Thursday in a 192km journey from Trujillo to Alto de Piornal.