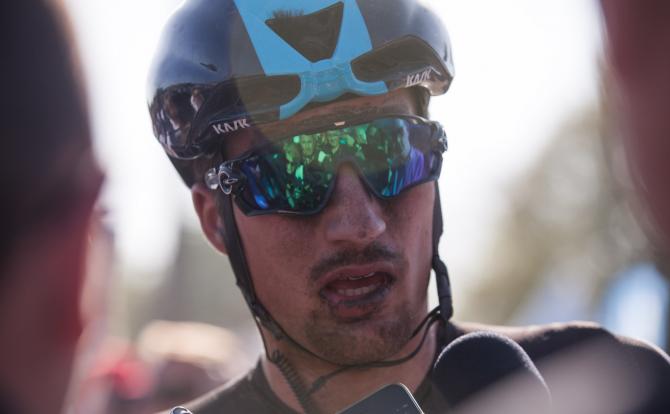 Sebastien Reichenbach is taking his case against Gianni Moscon to the Italian Justice system after the Team Sky rider intentionally knocked him off his bike during the Tre Valli Varesine.

Reichenbach was left with a fractured elbow and hip after the incident. The FDJ cyclist says that Moscon deliberately pushed him to the ground and claims that the incident was in retaliation for a Tweet he made about Moscon.

“Moscon pushed me on purpose and he has to pay for that,” the Swiss rider commented. “It was during a downhill stretch. I was riding at more than 60 kilometres per hour and I got pushed by Moscon. He simply launched himself against me.”

Reichenbach says that other riders in the peloton saw the incident and would testify against the Italian if needed. “Some riders were witnesses of what happened and are open to testify because this can’t be overlooked. My team has supported me into taking this to the authorities.”

The Swiss rider has also called on any roadside spectators who may have filmed the crash to come forward.

“I hope someone has recorded this with their mobile phones because it is still a case of my word against his.”

“The law doesn’t end at the door of the stadium,” Reichenbach’s lawyer Johnny Maeschalck explained. “The normal rules of criminal and civil law also apply to sports. It’s unusual, but if a rider thinks he has been injured on purpose, he has the right to go to court.

“He will have to prove it. Recorded images would be ideal, but photos and testimonies may suffice.”