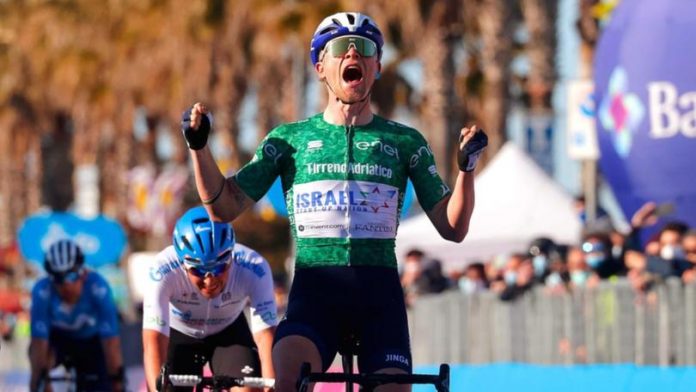 Mads Wurtz Schmidt (Israel Start-Up Nation) claimed his first WorldTour win in the sixth stage of the Tirreno-Adriatico, beating four others in a breakaway sprint on Monday.

“It means the world to me. I haven’t won since I turned pro. It’s a huge relief, it’s what I’ve been fighting for for the last five years,” Schmidt said after the 169km ride from Castelraimondo to Lido di Fermo.

“It was a hard start. First I tired with two other guys but we didn’t get away. Then I got away the second time with this group and we worked really well together.

“We all had in mind that we had to go hard… to break the morale in the peloton and we succeeded with that, we worked really well together. It was a super hard stage but I felt good when we came into the final.”

Tadej Pogacar finished in the peloton a minute and nine seconds behind but retained the overall race lead ahead of Tuesday’s final stage, a 10.1km time trial.