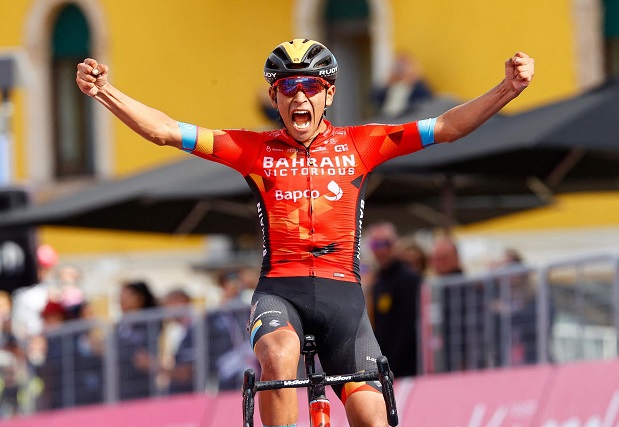 Santiago Buitrago won the 17th stage of the Giro d’Italia on Wednesday to claim the biggest victory of his career.

You can rewatch STAGE 17 HERE

The 22-year-old finished the 168 kilometres mountain stage around 30 seconds ahead of Gijs Leemreize while Jan Hirt, winner on Tuesday at Aprica, was more than two minutes back in third place.

“To win a stage in the Giro for me is exceptional, especially after the huge disappointment of my second place in Sunday’s stage,” said Buitrago. “I wanted to win this stage. This victory is for my family in Colombia and all the people who have supported me up to now.”

Carapaz, Hindley and Mikel Landa stayed with each other and made little impact on their positions in the overall standings.

Joao Almeida lost ground again and gave up more than a minute on Carapaz and Hindley.

The mountainous stage proved too much for Simon Yates, the 2018 Vuelta a Espana champion abandoning due to a painful knee.

Yates, third in the 2021 Giro, had won two stages on this year’s race but his hopes of overall victory had disappeared on the 10th stage when he lost a huge amount of time.

“The fall on Etna and the resulting knee problem weighed on Simon for the rest of the race,” said Matteo Beltemacchi, doctor of Yates’s Australian team BikeExchange.

“In spite of the daily physiotherapy and Simon’s tenacity, the pain got worse, which finally forced him to abandon.”

On Thursday’s 18th stage, the race descends into the plain which links Borgo Valsugana to Treviso over 156km, and is the last chance for the sprinters in this year’s race.