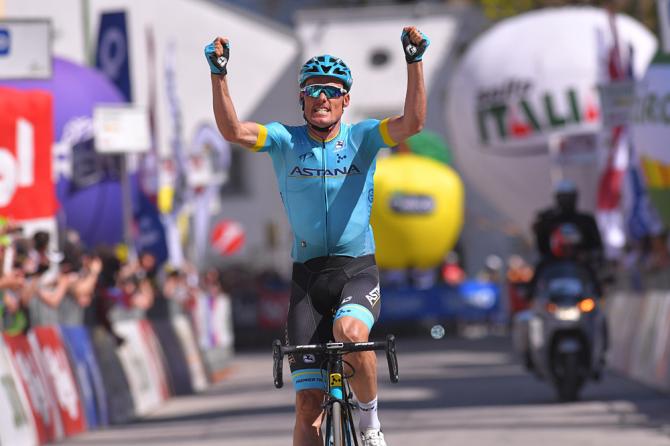 Luis Leon Sanchez (Astana) launched a trademark late break to win stage four of the Tour of the Alps on Thursday as Thibaut Pinot (Groupama-FDJ) kept the overall lead.

Chris Froome is also well placed after coming tenth on the stage. The Briton is just 16 seconds adrift of Pinot in the overall standings ahead of Friday’s intriguing final stage.

Domenico Pozzovivo (Bahrain-Merida) and Miguel Angel Lopez (Astana) are second and third overall with Froome fourth as he continues his preparations for the Giro d’Italia.

The Astana team dominated the final climb in this 134km run from Chiusa in Italy to Lienz in Austria before a steep descent and a 2km run for the line where Sanchez made his move.

The Spaniard created enough of a gap to win by six seconds ahead of Kiwi George Bennett of LottoNL-Jumbo and his Dutch teammate Koen Bouwman.

“In the final I knew I had to attack to win the stage,” said Sanchez. “I did it a few times, on the downhill and later inside the last two kilometers. The second time it worked well, and I could get a small gap, enough to win.

“I am happy with this victory since it gives me motivation and confirms I am in the right place for the Giro.”

The race finishes Friday after a 164km run from Rattenberg to Innsbruck which features a series of climbs, one of which peaks 12km from home before a 6km descent and a 6km dash for victory.

Although Froome is using this week to hone his form for next month’s Giro, the Briton hinted he could be among the men to watch when overall victory is decided on Friday.

“The GC (general classification) is still very tight – with less than 20 seconds between the top four on GC,” Froome said. “It’s a bit of a taster of what we’ll see at the Giro. You can read a bit into where people are at at the moment.

“Thibaut seems to be in great shape, Aru seems to be on the way up. (Domenico) Pozzovivo is right there and Astana have got a really strong team.

“I think it’s a little taster for what’s to come – but obviously there are going to be quite a few other names that come into play once we hit the Giro.”