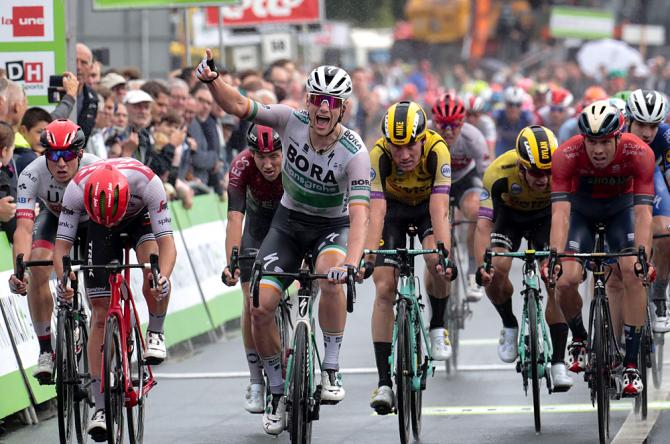 Sam Bennett took his first victory in the Irish national champion’s jersey as he won the bunch sprint on stage one of the Binck Bank Tour.

The opening stage concluded with a bunch sprint, with Edward Teuns (Trek-Segafredo) leading the way, but he was caught by a great move around the outside by Bennett.

Earlier in the race, Baptiste Planckaert took first place twice at the Super 8 Checkpoint Sprints, claiming the beige leader’s jersey in the Checkpoint classification; and in the Golden Kilometre Lukasz Wisniowski took two first places and one second place in the triple intermediate sprint.

“It was pretty dangerous. I was just trying to keep up front. The guys did a good job keeping me there and I kept in a good position in the last 2km and just tried to hold on to the bigger trains. I just tried to stay out of trouble really.

“To be honest, I was nervous with the rain, I had a few skids in the race. But it was good, I can’t complain.”