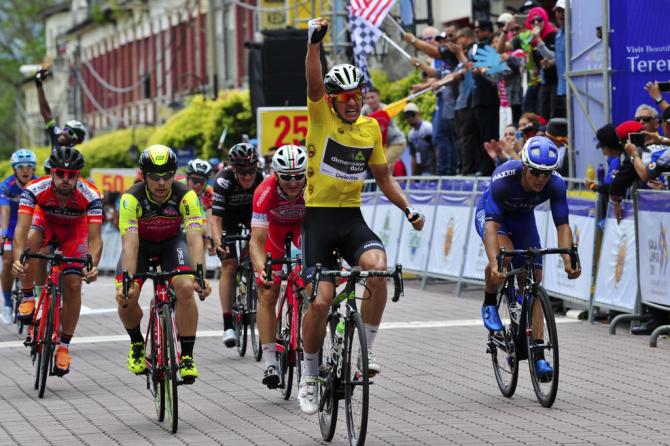 The 5th stage of the Tour de Langkawi took riders on a 151km journey from Meru Reya to Kuala Kubu Bharu. It was a fast start with multiple attacks in the opening 50km and eventually 1 rider was allowed to go clear.

There was 3 bonus sprints out on course where race leader Ryan Gibbons was able to extend his overall lead by 2 seconds. With just 1 rider up the road, Dimension Data was able to control the race comfortably all stage.

It was then a frantic race to a sprint finale, one which suited Gibbons characteristics as the rough bricked surface and gentle rise to the line was tailored for a strong sprinter. The young South African kicked for the line around 200m to go and left the others behind. With just more than a bike’s length lead, Gibbons was able to throw his hands in the air to celebrate the first professional victory of his career.

Ryan Gibbons now has a good lead on the overall GC.

“I am absolutely thrilled. I am so happy I could repay my team for all their hard work and also just so happy I could get off the mark with my first professional win”, said Ryan Gibbons. “Hopefully it is the start of something great. The first priority was to keep yellow today but I got a few points during the sprints out on the road which brought me the Teal jersey as well. From 10km to go, it was all systems go for a sprint and I am so happy I could pull it off. The start of the race was really busy, nobody wanted to let a break go but our guys were special, covering anything too dangerous. Eventually we could let 1 guy go and then Jacques Janse van Rensburg and Adrien Niyonshuti controlled the race all day, these guys are fantastic.”