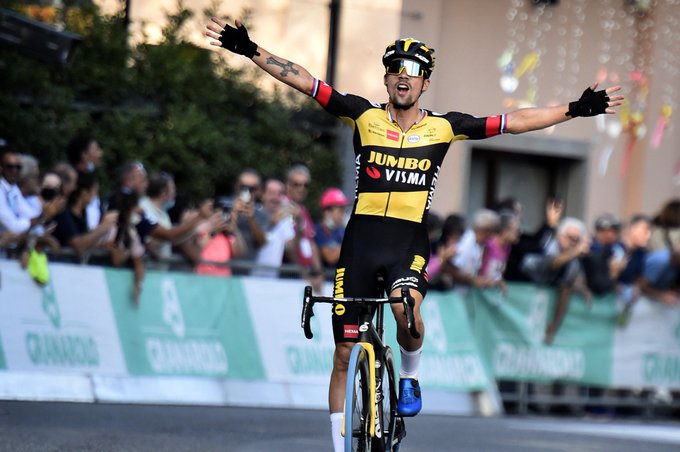 Primoz Roglic won his second Giro dell’Emilia on Saturday, following his 2019 victory, as he edged out Joao Almeida at the end of the 195-kilometre one-day race.

The three-time Vuelta winner was the strongest rider in the five-man group that battled for victory on the fifth and final ascent of the San Luca climb in Bologna.

Almeida, who benefited from the work of his Belgian Deceuninck-Quick-Step teammate Remco Evenepoel, battled almost to the end but had to give up a few seconds from the line as Roglic powered to victory. Michael Woods finished third, with Adam Yates fourth.

“It was a tough race”, Roglic acknowledged. “We were in control of the race all day. The whole team contributed to that. At about forty kilometers from the finish line, we came to the front with several strong riders. It was a good scenario that Jonas and I were there, and a little before that Sepp as well. We rode alertly all day and were in the places we wanted to be.

“I was able to follow every attack in the final phase. In the last few hundred metres I saw my chance and decided to attack myself. Luckily I had good legs and I was able to take the victory. Again I enjoyed the crowd along the side. That makes this victory extra nice. I have a lot of good memories of this climb and I’m glad I was able to add one today. Hopefully, I can return here in the future and fight for victory again. The focus now is on Milan-Turin and the Tour of Lombardy. I’m ready to end the season in a beautiful way”.