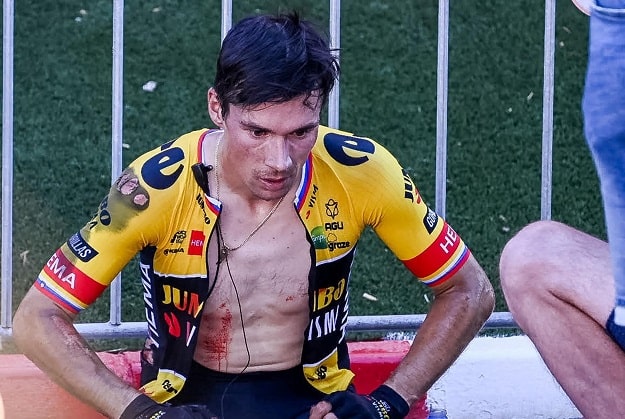 Primoz Roglic’s hopes of a fourth successive victory in the Vuelta are over after injuries from a fall saw him withdraw from the race prior to the 17th stage.

“Unfortunately, @rogla will not be at the start of stage 17 as a consequence of yesterday’s crash,” tweeted his Jumbo-Visma team on Wednesday.

“Get well soon, champion! Thank you for all the beautiful moments in this Vuelta. You had ambitious plans for the final days, but sadly it isn’t meant to be.”

The 32-year-old came to grief when he launched a late attack in Tuesday’s stage, hoping to pick up seconds to close the gap on Remco Evenepoel. But 100m from the finish line Roglic, the three-time reigning champion, swerved and fell hard. His left knee and hand were covered in blood.

He still crossed the line but was clearly in pain and holding his side, before slumping to his knees after he dismounted.

Roglic, who also retired early from this year’s Tour de France as a result of a fall, was 1 minute 26 seconds adrift of Evenepoel with the race due to finish on Sunday.

Wednesday’s stage is a challenging 162.3 kilometres ride which finishes high up at the Tentudia Monastery.