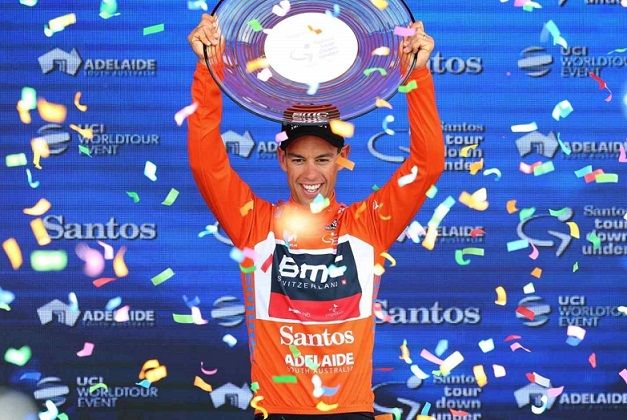 Richie Porte has crossed the finish line at the Tour Down Under stage 6 criterium to secure the overall win for the first time in his career.

After standing on the podium in 2015 and 2016 in second place, Porte stamped his authority on the 2017 edition with two impressive solo victories on the Paracombe and Willunga climbs, to win with the biggest winning margin in the race’s history.

With a 48-second lead before stage 6, Porte was kept safe by his teammates as the peloton tackled the 20-lap circuit around Adelaide and crossed the line safely to retain his lead.

Caleb Ewan (Orica-Scott) sprinted to victory on the city-center circuit in the last stage, ahead of world champion Peter Sagan (Bora-hansgrohe) and Marko Kump (UAE Abu Dhabi), for his fourth stage win.

“I actually joked with my girlfriend at the start of the week that I would go for four stages but I didn’t actually think it was going to be possible,” Ewan said of his success at the 2017 Tour Down Under.

“It’s an incredible relief. I think back to nine years ago when this race really kicked off my career.”, said Richie Porte. “This is where I came a wild card. Then two years later I was in the WorldTour. So to win it is a massive relief. I’ve been close two times before so it just feels fantastic. Cycling is kicking massive goals in Australia with the crowds you’re seeing on the road. I must say I’m so happy with my team too. They rode incredibly today and the whole week so it’s just an overwhelming feeling of satisfaction to win this.”