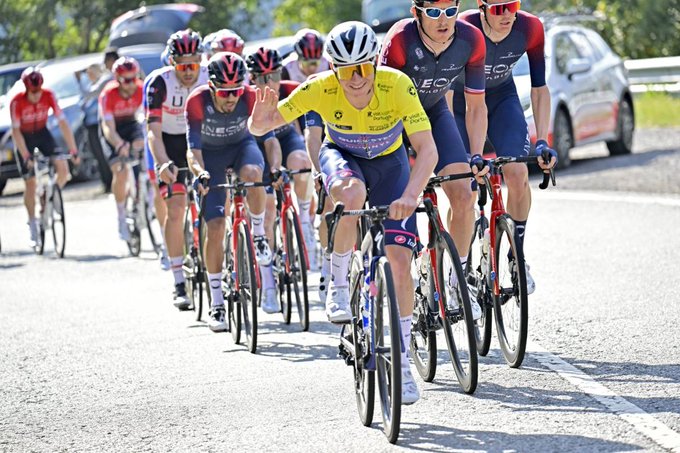 Remco Evenepoel started the final stage with a lead of just over a minute over Ethan Hayter. The last 40 kilometres had the climb of Alte and a double passage of the Alto do Malhao.

The Belgian rider had no problem to control the race and had time to ease up and celebrate in the yellow jersey as he rode across the line atop the Malhao to finish fifth on the day.

Evenepoel ended the race 1’17” ahead of Brandon McNulty (UAE Team Emirates), with Martinez rising to third after his Ineos teammate Ethan Hayter slipped back on the climb.

“It feels amazing. I knew this week the time trial was the most important. I went all out yesterday and I could still feel it in my legs today”, said Evenepoel. “But then when we approached the climb the last time here, Louis Vervaeke and the guys did a perfect job. Louis put a perfect pace. Then I did an attack but I could see the guys were still following and I felt immediately they were not going to attack immediately. So then I decided to put a high pace until 200m to go or something and then when I saw them jumping, I had already pushed quite some power so I just let it go a bit. I knew my advantage was quite big. I just wanted to enjoy the last meters in my yellow jersey a bit more and that’s why I celebrated on the line.”