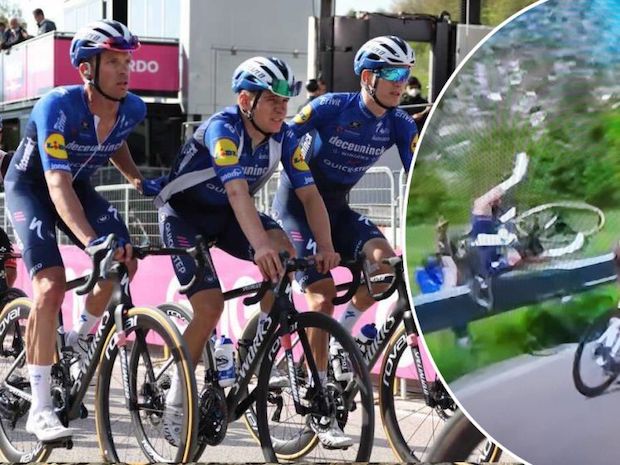 Following his crash on Wednesday’s stage 17, Remco Evenepoel has decided to retire from the Giro d’Italia.

The young Belgian was involved in an incident that brought down several riders, both in front and behind him, on the descent of Passo di San Pelegrino, with 25 kilometers to go. He was able to finish the stage and was then examined by the doctor. This examination has revealed there were no fractures, but he has suffered multiple skin lacerations and contusions.

Following the diagnosis, the medical team of Deceuninck decided that it would be best if Evenepoel was to leave the race and recover completely as fast as possible, before working towards his goals for later in the season.

“In the end it was a crash that shouldn’t have happened, I don’t know what really happened in front of me, but I came into the corner and saw some guys on the ground and I couldn’t pass on the right side because I was next to another guy, so I didn’t have any chances to avoid a crash. For now, there isn’t anything broken, but I have a lot of contusions, it doesn’t make a lot of sense to carry on with this pain. So I go back to Belgium and go for some CT scans. Then we will see”, said the young rider.

“Of course it’s sad to leave the race, and my first Grand Tour too early, but in the end, it was a nice experience and I hope to be back one day again. I’m wishing the best to all my Deceuninck–Quick-Step teammates for the remaining stages.”