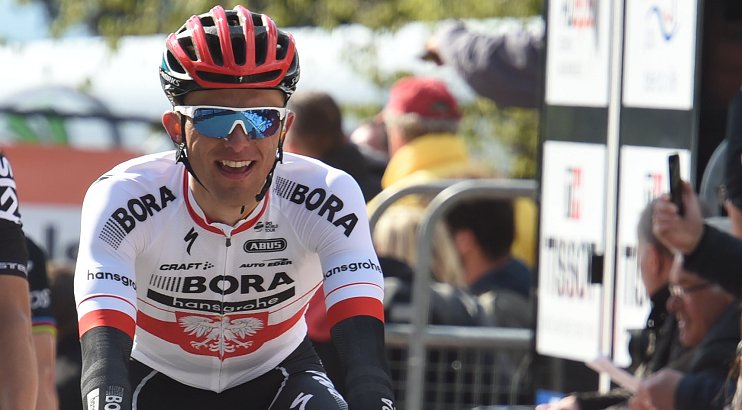 Rafal Majka (Bora-hansgrohe) has held off Giovanni Visconti (Bahrain Merida) to win the penultimate stage of the Tour of Slovenia and take the leader’s jersey.

The profile of the third stage in Slovenia today, was different to the fairly flat previous days. Between Celje and Rogla, the riders had to master 167.7 kilometers and a almost 14k mountain top finish. Therefore, today was the day for the GC contenders to battle for glory in the Tour of Slovenia.

At the foot of the last climb, all escapees were reeled in. Gregor Mühlberger (Bora-hansgrohe) set the pace in the bottom slopes of the ascent, which reduced the bunch to just 9 riders. With 10k to go Rafal Majka attacked the first time and just 2 riders could stay in his wheel. Nobody wanted to work though, because it was obvious that Majka was by far the strongest.

In the end Majka took the win with a long sprint from the front. Therefore, Rafal Majka is the new race leader and looks confident and ready for the Tour de France.

“First I have to say thanks to my team mates. They did an excellent job, also the past two days. I attacked early because I didn’t know the climb and didn’t want to take any risk. Nobody wanted to cooperate, so I tried it several times. In the end I took the win, and that is important. I am very happy, not just for this win, also because this was a good test after 3 weeks training in Sierra Nevada. I think I am ready now for the Tour”, said Rafal Majka.