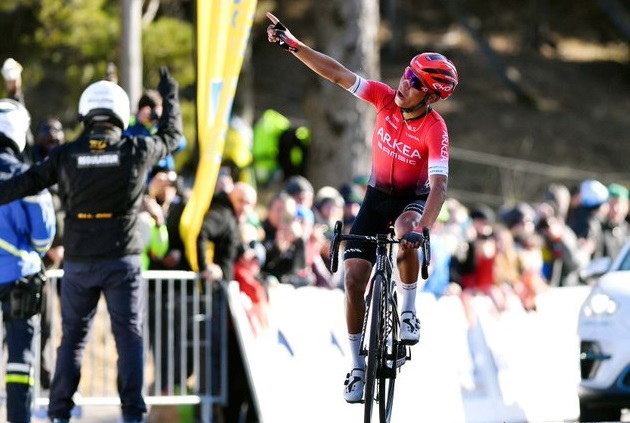 Nairo Quintana rode his opponents, including Tim Wellens, off his wheel on the final stage 3 to Blausasc and soloed to the stage and overall victory at Tour des Alpes Maritimes.

Tim Wellens started the last stage of the French race in the leader’s jersey, but Nairo Quintana was on the same time at the start of the stage and was looking for the overall victory.

On the flanks of the Col d’Eze, the first climb of the day, the race exploded. A leading group with fifteen riders escaped on the climb. Thibaut Pinot and Michael Storer (both Groupama-FDJ), Lilian Calmejane (AG2R Citroën), Anthony Perez (Cofidis) and Roger Adrià (Kern Pharma) were part of the strong group. In the considerably thinned peloton, it was up to the men of Lotto Soudal to chase for yellow jersey wearer Tim Wellens.

Quintana’s moment came on the flanks of the Col de Saint-Roch The man who won the Giro d’Italia and Vuelta a Espana, stepped hard on the pedals with 3 kilometres to climb. Wellens had to let him go, but the Belgian tried to limit the difference at his own pace, knowing that there was still a long descent to the next climb. The Colombian rode with a solid rhythm, passing and dropping riders as he climbed.

With about 20 kilometres to go Quintana and Pinot were in the lead, but with only 20 seconds on the chasing group with Wellens, Guillaume Martin, Storer and Alexis Vuillermoz. Everything was still to play for. Quintana had no intention of letting Wellens return, so he dropped Pinot. Quintana was alone and undertook an all-or-nothing attempt to take the overall victory.

The last kilometres were a victory parade for Quintana. In Blausasc he had plenty of time to make the victory celebration for his stage and overall victory. Guillaume Martin crossed the line in second place at 1’30” after Quintana. Not much later Vuillermoz won the sprint for third place, ahead of Pinot and Wellens, who had to give up his yellow leader’s jersey.