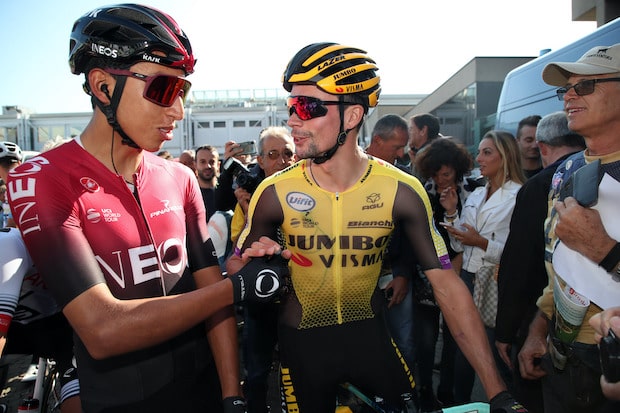 Primoz Roglic is one of the riders who is expected to fight for victory in the 2020 Tour de France as last year winner Egan Bernal already called Roglic his biggest competitor.

“I appreciate that he says that,” said Roglic. “I hope what he says will come true. In any case, my goal is to finish as high as possible. I have no doubt that Egan will also be very strong.”

This spring, Nairo Quintana impressed all the critics with victories in French stage races, including the final stage in Paris-Nice.

“I think it will be difficult to stop in the Tour,” Roglic predicts. “But I am especially curious how some will start the restart of the season. That will determine a lot.”

The Slovenian said that he respects Chris Froome’s decision to switch to Israel Start-Up Nation next season.

“I respect Froome’s decision,” he said. “I can’t say much but he is definitely one of the champions of this generation of cycling. I’m sure he’ll do what is necessary to return to his highest possible level. We’ll have to wait to see how he will be at the Tour, where he’ll surely be fine.

“Bernal is the winner of last year’s Tour. He’s a champion and will surely be very, very strong this year. I appreciate [him saying I’m his main rival]. But it’s just a wish; I hope it happens. I hope I can be in the top places at the Tour.”