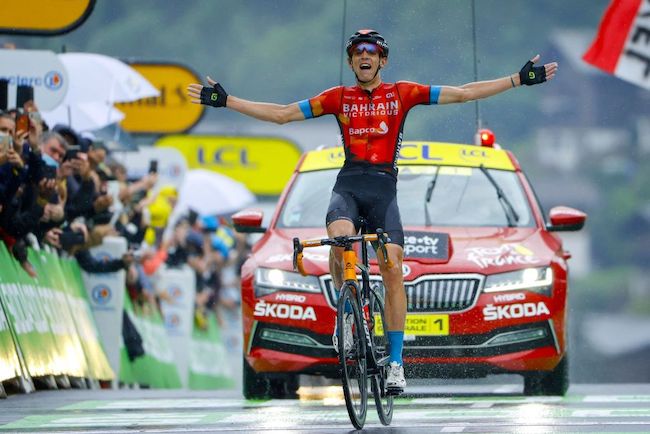 Tadej Pogacar put the hammer down on the Tour de France on Saturday as he claimed the overall leader’s yellow jersey with a vintage ride on the 8th stage, a 150.8-km Alpine trek from Oyonnax to Le Grand Bornand.

You can rewatch STAGE 8 of 2021 Tour de France HERE

The young Slovenian attacked on the penultimate ascent of the day, the Col de Romme, to distance all his rivals in a long-range move reminiscent of racing in the 1980s, as Dylan Teuns won the day’s laurels from the early breakaway.

Pogacar was fourth on the stage behind Spain’s Ion Izagirre and Michael Woods, who were second and third respectively, 49 seconds off the pace but with an advantage of more than three minutes on all his rivals for the general classification.

Last year’s runner-up Primoz Roglic and Geraint Thomas, the 2018 champion, were distanced early on and now have zero chance of a podium finish in Paris, after suffering crashes in the first days of racing.

The stage got off to a frenzied start with attacks flying before the first proper climbs, which resulted in both Roglic and Thomas being dropped as rain poured down, and the duo finished just over 35 minutes off the pace.

“These were horrific conditions, it was so cold and so wet,” said Teuns.

The bunch was split in two early on, and once the dust had settled, a group of a dozen riders formed the day’s breakaway in driving rain.

In the first of three first-category climbs, the Col de Romme (8.8km at 8.9%), the group of overall contenders came apart, with Van der Poel being dropped while Woods was leading solo from the breakaway before being caught and dropped by Teuns.

Pogacar jumped away from the group 3.5km from the summit, some 32km from the finish line, and only Carapaz followed before folding when the Slovenian attacked again.

The 22-year-old Pogacar powered up the last ascent, the Col de la Colombiere (7.5km at 8.5%), swallowing up and spitting out the breakaway riders one by one, with the exception of Teuns.

Pogacar was on Teuns’s heels at the top of the climb but with his rivals all vanishing in his rear view mirror, he took no risks on the final descent.

Van der Poel, who started the day in yellow, had no real title hopes, and the Dutchman crossed the line almost 21 minutes after Pogacar, who should now just need to avoid any major mishaps to secure a second consecutive title.

“Everybody will fight until the last day but I think he will (successfully) defend his jersey until the end, ” said Teuns.