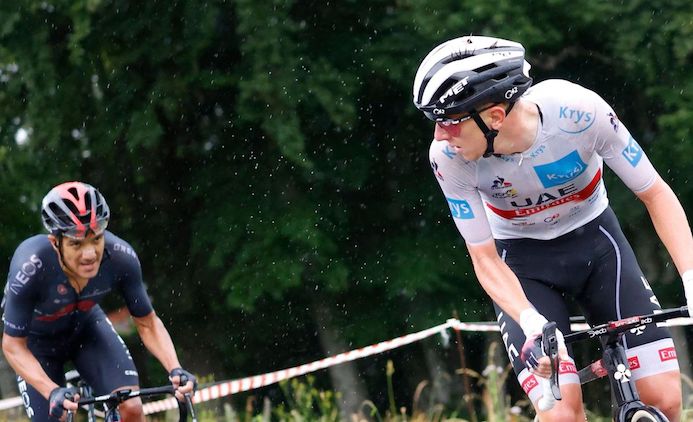 Before the start of this Tour de France, the strength of Ineos Grenadiers was still feared. With four leaders for the general classification, the British formation could have been a real threat for the Slovenians Tadej Pogacar and Primoz Roglic.

However, after only 8 stages Richard Carapaz has a gap of 5min01s on Pogacar, while Geraint Thomas, Richie Porte and Tao Geoghegan Hart are out of the GC battle already.

“I think we have to go way back in cycling history to find a comparable performance. Tadej deserves all the credits. He is on a different level than any of his rivals. You also have to have the courage to start such an action at 34 kilometers from the finish. I have a lot of respect for that”, Ineos Grenadiers manager Dave Brailsford said after stage 8.

“We will have to keep fighting. For this Tour I had already expected a stage in which there would be plenty of attack. So far it’s been an incredibly nice tour. The first week was already incredibly tough. When I see how they raced to Le Creusot on Friday and Le Grand Bornand on Saturday, it’s unbelievable. These kinds of rides require a lot of strength from everyone. If everyone continues to race with this intensity in the rest of the Tour, I wonder who will be left in two weeks. I don’t think we’ve seen such a tough Tour in recent years. That can make it very exciting. We are going to look at this Tour from day to day from now on. A lot can still happen. We will definitely continue to fight.”

“Pogacar is by far the strongest rider in this Tour at the moment, but it is still a long way to Paris. There are still many tough stages to come. The intensity is very high, but besides that something happens to everyone. We have already seen top favorites such as Geraint Thomas and Primoz Roglic drop out of the standings. Everyone expected another duel between Pogacar and Roglic. The battle was over after three days. Pogacar dominates now, but that doesn’t mean nothing can happen to him. We just have to keep fighting for our position.”

“Obviously Richard is the strongest of our team. He shows guts. On his way to Le Creusot and Le Grand Bornand he dared to attack for two days. I like that setting. I think we have to keep that courage in the squad. We should not now not resign ourselves to the rule of Pogacar, but realize that after every corner the situation can be completely different.”