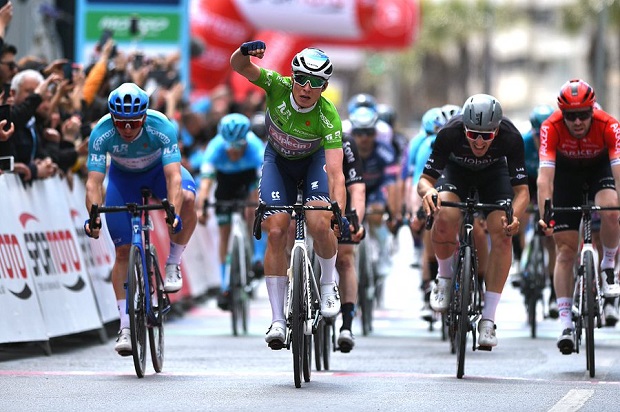 Jasper Philipsen won the third stage of the 2022 Tour of Turkey on Tuesday, outsprinting Kaden Groves and Miguel Angel Fernandez.

It was another flat day, so a bunch sprint would be very hard to prevent on this day. The race will enter the mountains tomorrow, however the sprinters still have a hold of the race as there will be three different leaders at the end of three stages.

Crashes once again wiped out several riders in the final kilometers, and in the run-up to the line Team DSM rode strongly and put Alberto Dainese in pole position for the dash to the line.

The Italian had speed but was surprised from behind by Kaden Groves who launched his sprint, but was overtaken by Jasper Philipsen in sight of the line.

“If I was second again today, it’d have been shit but two times second and a win is good,” Philipsen said.

“Maybe my sprint is not on the best level yet. But we’ve got some time to do some sprints and then go towards the Tour de France with some speed in our legs.”