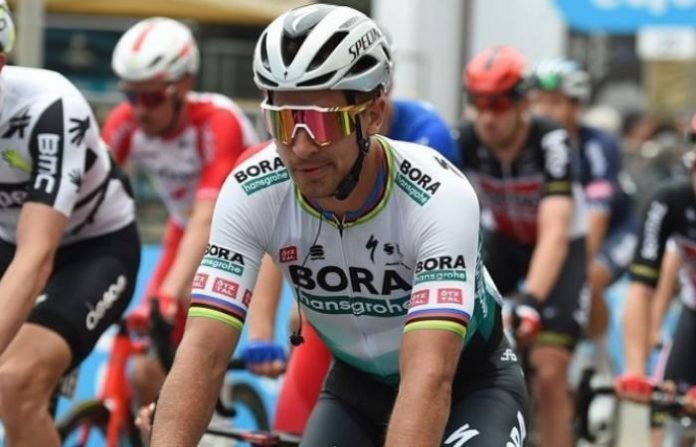 Peter Sagan finished fifth again in a sprint at the Tour de France but the Slovakian says he’s satisfied and still in the fight for the green jersey.

“I haven’t won a stage yet but I’ve been up there and I’m just happy to still be in the thick of the action considering what happened on stage 3”, Sagan said after stage 6.

“My knee is still causing me problems but I’m feeling better and hope I can be back to 100 per cent soon. I’m not worried about reaching Paris or anything, I just want to be back to my very best.”

“I’m still in the hunt for the green jersey at the Tour de France. We’re only at the sixth stage, even if it feels we’ve been racing for two weeks. Nothing is lost for now and we’ve still got to climb into the mountains.

“My biggest rivals for green like Michael Matthews and Sonny Colbrelli are still up there and riding well too, but they’re within reach. We’ll see what happens after the Alps and on the flat stages in the south next week.”

Sagan congratulated Mark Cavendish after his first win in Fougères and praised the British sprinter on his success.

“I offered my hand to congratulate him as I usually do to every winner. I’ve got nothing against him,” Sagan explained. “I think what happened back in 2017 is still on his mind, not mine. I’ve moved on and I’m happy for him that he’s won.”