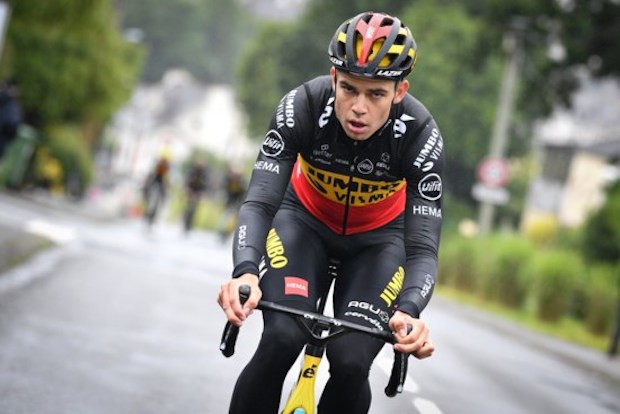 As he indicated after the time trial, Wout van Aert participated in a bunch sprint for the first time in this Tour today, in stage 6.

“I should have stayed longer in Mike’s (Teunissen) wheel,” Van Aert said.

“I wasn’t up front. My reasoning was that it was impossible to move up in the last straight line. That’s why I left Mike’s wheel to find my own way, but I shouldn’t have done that. I stayed too much in the wind. I should have stayed longer in Mike’s wheel. In the end I also had to brake after a whip. When I got to sprinting, I was already ten lengths behind.”

However, tomorrow Van Aert might have another chance as the Tour enters the mountains.

“Perhaps. It’s a super long ride. In combination with the profile you would think that it is a first time opportunity for a breakaway group to stay ahead. On the other hand, the teams of guys like Matthews, Colbrelli and Sagan don’t have that many chances to drop the pure sprinters.”

“So maybe there will be a sprint,” Van Aert hopes. “Maybe it is possible, but first I have to survive on the road.”