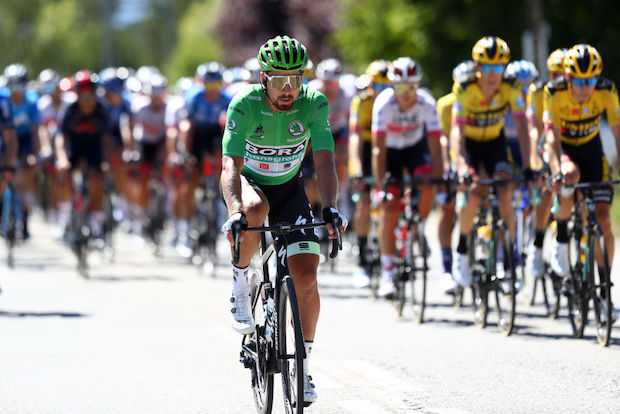 Wout van Aert took a second win of the Tour de France after an eventful stage  that saw the peloton blown apart and Peter Sagan move back into the green jersey.

Sagan was unable to build on the hard work done by his teammates as he finished in 13th place in the final sprint, enough however to see him return to the top of the green jersey standings with a lead of nine points over Sam Bennett.

“It was a mechanical problem, yes, but that wasn’t the whole story,” said Sagan. “I was behind Van Aert, but then I got out of position, and everybody went left, I tried not to fall, but I collided with someone, I don’t know who, and my chain came off. I’m lucky not to have crashed. After that, it was impossible to get to the front.”

“I’m disappointed because we controlled all the race today and everything seem like it was very good, but in the end, I had bad luck in the final, and my chain dropped off,” Sagan said. “I missed a lot of points today, but that’s cycling. I’m very proud of all the guys because they did a very nice job; they pulled hard from the start until the crosswinds. In the end, we were in the front with Emanuel Buchmann, and everything was really nice … and that’s fucking cycling.”

“In the morning we had planned to make the race hard, taking advantage of the crosswinds and cross-tail winds,” said sports director Enrico Poitschke. “We got off to a strong start, attacked early, and in particular in the second climb, three kilometers long, we planned to ride as hard as possible and use the crosswinds. The first guys were dropped there and we then kept on pushing.”