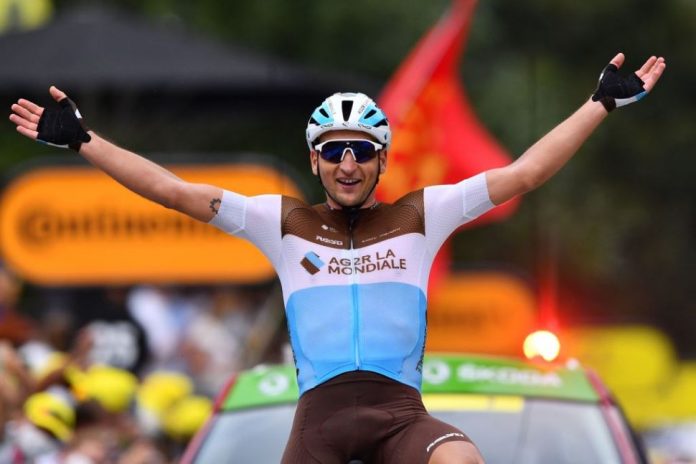 Nans Peters won the eighth stage of the Tour de France, a 141km mountainous trek from Cazeres-sur-Garonne on Saturday, as fellow Frenchman Thibaut Pinot effectively lost all hope of becoming the first local winner of the race since 1985.

Peters won from the breakaway after a tough day in the Pyrenees, finishing almost a minute ahead of the chasing Tom Skujins (Trek Segafredo). Carlos Verona (Movistar) was third and Ilnur Zakarin (CCC) placed fourth.

Pinot was dropped on the second ascent on a day that also saw Tom Dumoulin crack, while defending champion Egan Bernal struggled.

Adam Yates hung on to the overall leader’s yellow jersey, managing to cross the line with the main contenders despite being dropped several times on the ascent of the Col de Peyresourde.

He leads pre-race favourite Primoz Roglic, who looked in control throughout, by three seconds and Guillaume Martin by nine.

Roglic’s fellow Slovenian Tadej Pogacar, who had lost time on a stage fraught with crosswinds on Friday, was the most successful attacker of the day, regaining 40 seconds to move up to ninth place overall, 48 seconds off the pace.

“I saw that the other guys were looking at each other and everyone was on the limit, I had the chance to attack and I went full gas for the last 5 km to the top,” Pogacar said.

“In the downhill I tried to go as deep as I could and at the end I had 40 seconds of advantage, so it was a good day for me. Tomorrow will be another hard day, we will see day by day how we face each stage.”