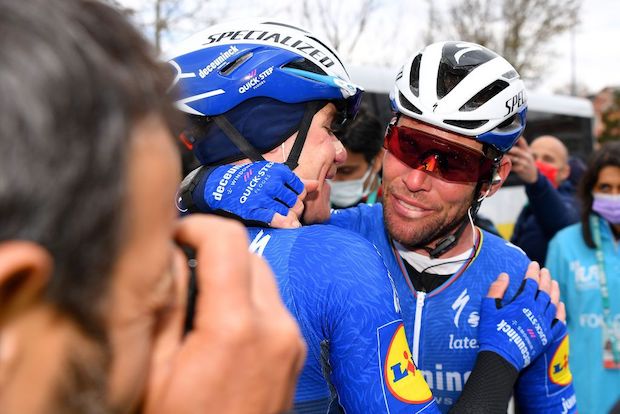 Patrick Lefevere will soon sit down with Mark Cavendish to discuss a contract extension.

“Extend Cavendish for the Tour, on better conditions. With the level he has now, he wants to continue for at least another year.”

Lefevere brought up his rider’s contract situation in his weekly column in Het Nieuwsblad following a dinner he had with Cavendish last week. Lefevere had asked Cavendish if he wanted to do another Grand Tour. His answer: “Not on this salary, no.”

“That may sound cynical, but I understand his point of view”, says Lefevere. “Mark joined our team at the last minute. At that time, the Tour was out of the question at all. He signed a minimum contract because we had minimal expectations. The cards are different now. His level is much better than expected.”

“The Tour of Turkey is only the Tour of Turkey, but he won four stages. Mark was also freewheeling in the Scheldeprijs and in the Elfstedenronde he was at least as fast as Tim Merlier in the sprint on Sunday. Mark still has his speed. But I understand that he is not waiting for a Tour de France. For him, that means racing under pressure, under the magnifying glass of the media. If he even comes close to a win, everyone starts talking about Eddy Merckx’s record. He has won 34 stages in the Tour, Mark is now at thirty.”

Deceuninck-Quick-Step can benefit from a possible contract extension of Cavendish. Especially because Sam Bennet is still uncertain for the Tour de France.

“There is no real plan B as a sprinter. The problem is that he suffers from inflammation of the patellar tendon and those are persistent injuries. We’ve been through it before with Tom Boonen, Zdenek Stybar and Andrea Bagioli, all of whom even had surgery. Will Sam make the Tour? At the moment we don’t know. He has to rest until at least Monday.”