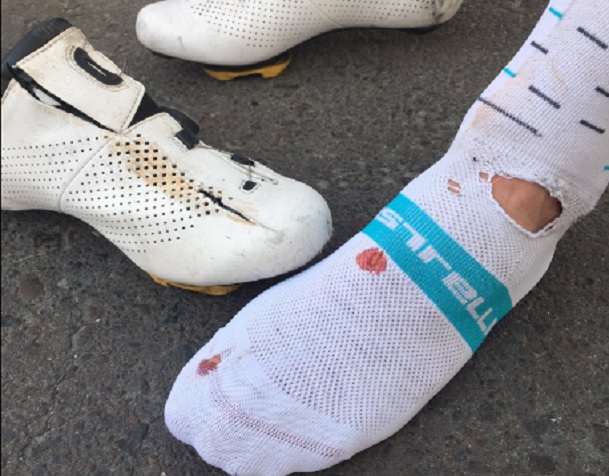 A big crash occurred in the first stage of the Abu Dhabi Tour as the peloton went under the red kite at a kilometre to go.

When the road narrowed as some barriers demarcated the inflatable gantry, a mass of bikes was seen to go flying. Marcel Kittel (QuickStep Floors) and Caleb Ewan (Orica-Scott) went down in that incident, while Owain Doull (Team Sky) suffered some nasty-looking cuts, allegedly as a result of one of Kittel’s disc brakes.

“My shoes cut the pieces, that’s definitely brakes that did that,” Doull said. “It’s gone straight through my shoe into my foot. That’s lucky it is not my leg. If that had been my leg it would have cut straight through it.”

“Unless there are covers on then you should not use them.” Mark Cavendish stayed out of trouble and reaped the rewards as he secured his first win of the season and the 145th of his career.