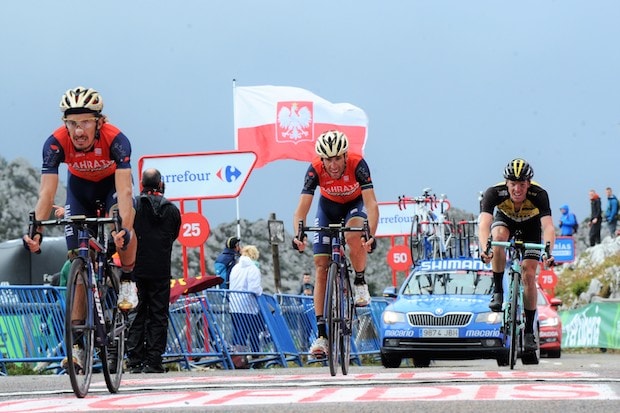 Chris Froome had no difficulty from Vincenzo Nibali on the last day for GC at the Vuelta and will finally win the Spanish grand tour after three runner-up spots.

Third place on the stage saw the Briton extend his lead over Nibali to 2’15” after the Italian could only finish in sixth place after crashing on a wet descent ahead of the decisive climb.

“It’s a shame for the sliding in the curve”, said Vincenzo Nibali. “It was raining and the road was dirty and slippery. Until then we did a great race but then I had to defend myself on last climb. I’m glad I was able to defend my second place”.

“My teammates have done a wonderful job but I must thank Franco Pellizotti in particular. Without him and with the strong pain on my left side I do not know if I would arrive with the best at the finish line at the top of Angliru. ”

“I gave everything I could to help Vincenzo”, said Franco Pellizotti. “It would have been very bad after three weeks to lose the podium. After the third place at the Giro d’Italia, this second is the proof that we have worked and done well. ”

“We got a great second place in the overall stand behind Chris Froome and behind a big team”, added Franco DS Gorazd Štangelj. “Vincenzo’s fall has obviously conditioned his race, but it remains the great satisfaction that he has also closed with a stage win and numerous Top Ten. ”