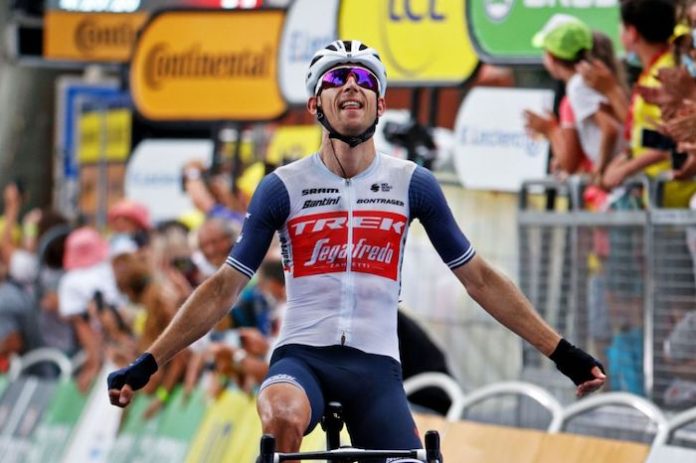 Bauke Mollema completed a bold, vintage solo raid to claim his second Tour de France win at the end of the 14th stage, a rough 183.7-km ride from Carcassonne on Saturday.

Tadej Pogacar retained the overall leader’s yellow jersey at the end of a hot day in southwestern France, on roads peppered with short but brutal climbs.

“I knew I had a good chance to make it to the end, I paced myself and when I saw I had a minute at the top of the last climb I knew it was done,” said Mollema, who sped away from the breakaway group on a descent with 42 kilometres to go.

“A few days ago, I had checked the course on Google Maps, especially the last 60 kilometres. I waited for the right moment to attack.

“I felt I had good legs in the breakaway and my confidence grew,” added Mollema, who had won his first Tour stage in 2017 in similar fashion and has six top-10 finishes on grands tours.

There was one major change in the general classification, however, as Guillaume Martin jumped from ninth to second after taking part in the day’s breakaway.

Pogacar leads Martin by 4:04, with Rigoberto Uran in third place, 5:18 behind the defending champion.

Michael Woods snatched the polka-dot jersey for the mountains classification despite a crash after a two-man battle over the climbs with Wout Poels.

“I’m the first Canadian to wear it and I’m proud of that,” said Woods. “On the crash, it’s my fault, I got in front because it was a dangerous descent but my wheel slipped.”

Sunday’s 15th stage is a lung-busting 191.3-km mountain trek to Andorra as the race reaches its highest point at the Port d’Envalira, 2,408 metres above sea level.