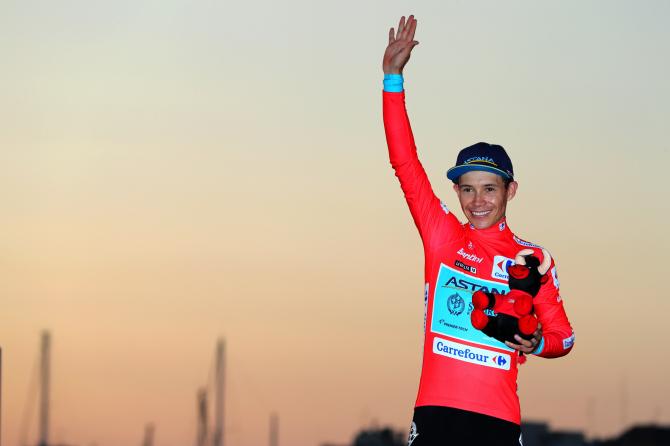 Miguel Angel Lopez has signed a two-year deal to rejoin Astana, after his contract was terminated by Movistar.

The Colombian pulled out of the Vuelta a Espana while in third place, to the fury of his team, who announced shortly afterwards they would separate by mutual consent.

“Coming back to the Astana team is a return home. In the world of professional cycling, a rider who wants to keep on moving forward sometimes has to change something in his career, to gain new experience. Sometimes it is a good one, sometimes not”, said Lopez.

“The main thing is that I am coming home to my team, the team that gave me so much and with which, I am sure, we will be able to live many more wonderful moments. There is a lot of work ahead for the new season to be successful for me and for Astana Qazaqstan Team.”

He previously spent six seasons with Astana from 2015 to 2020, achieving most of his major results there including GC victories at Tour de Suisse in 2016, the Volta a Catalunya in 2019 and the Tour of Colombia the same year. He was also on the podium at both the Giro and the Vuelta in 2018.

“Miguel Angel has gained serious experience, which, perhaps, he lacked in our team,” said Vinokourov who added Lopez was “still one of the strongest riders in the world”.