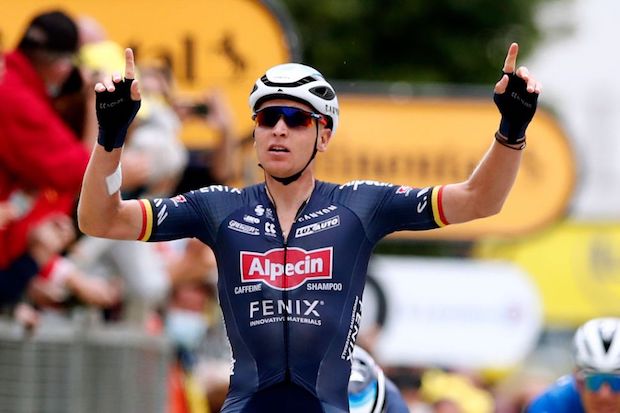 Tim Merlier won a crash-littered third stage of the Tour de France on Monday, a 182.9-km ride from Lorient to Pontivy, as two of the favourites to win the race, Geraint Thomas and Primoz Roglic, were left licking their wounds after coming down heavily in separate incidents.

You can rewatch STAGE 3 of 2021 Tour de France HERE

Merlier led a team one-two ahead of compatriot Jasper Philipsen in a sprint also marred by a crash in which pre-stage favourite Caleb Ewan hit the deck in the final metres and slid along the tarmac on his back.

Ewan, who had been tipped to win several sprint stages on this Tour, was later ruled out of the race with a right collarbone fracture, his Lotto Soudal team said. Nacer Bouhanni came third.

Roglic, second in Paris last year, crossed the line more than one minute 21 seconds off the pace and almost one minute behind defending champion Tadej Pogacar who was involved in another separate crash.

“In a finale like this, we’ve got GC (general classification) guys fighting against sprinters, it’s a dangerous sport,” Van der Poel told reporters. “Danger is everywhere.”

Richard Carapaz was the best placed of the pre-race favourites as he was with the leading group alongside Julian Alaphilippe.

Pogacar was 26 seconds behind in a group that also featured 2018 champion Geraint Thomas, who hurt his shoulder when he crashed on a wet road 37km into the stage.

“Geraint’s post-stage scan and x-ray were clear and we can confirm he has not suffered a fracture in his right shoulder. He will be reassessed in the morning before stage four,” Ineos-Grenadiers said in a statement.

The most affected appeared to be Roglic, who fell hard on his left side 10km from the line, sustaining bruises on his left leg and shoulder.

“Luckily we saw (from the x-ray) that everything is still in one piece, nothing broken,” said Roglic. “Not the best day for us but we go on. It was super stressful.”

In the overall standings, Van der Poel leads Alaphilippe, who could set his sights on a podium finish in Paris, by eight seconds, with Carapaz in third place 31 seconds behind the leader.

“It wasn’t a nice day out there. We saw too many crashes again and it was really hectic,” said Pogacar.

“When I crossed the line I didn’t know how much time I had lost. I heard some of my rivals crashed and lost time, but it’s not what we want to see. These first days have been really stressful and we hope it calms down soon.”

Tuesday’s fourth stage, a 150.4-km ride between Redon and Fougeres, should again favour the sprinters. 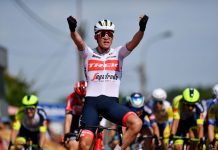