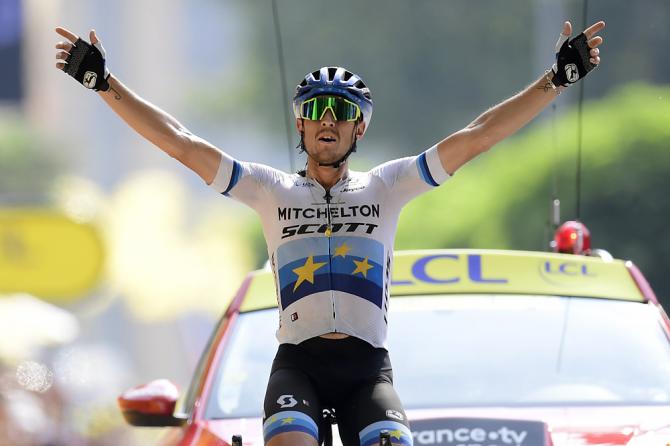 Matteo Trentin used a solo attack to win stage 17 of the Tour de France on Wednesday after pulling clear of a group of breakaway riders.

It was Trentin’s third career stage win at the Tour, but first since 2014.

Trentin rode at the front for most of the stage after taking part in a breakaway that formed just after the start of the 200-kilometer hilly ride from Pont du Gard to Gap.

The European champion moved clear of the leading group about 14 kilometers from the finish at the bottom of the Col de la Sentinelle. He was first at the summit and went all out in the downhill leading to Gap.

”I was scared of Asgreen and I was right because he finished second after getting a free ride in the break,” Trentin said. ”His tactic was to wait and wait, and so I went for it because he’s also strong on the climbs and fast in a sprint.”

The overall contenders crossed more than 20 minutes behind but there was not any significant change in the overall standings as Trentin and his breakaway companions were not a threat. Julian Alaphilippe has the yellow jersey, with defending champion Geraint Thomas in second place overall.

In the final stage before three decisive days at high altitude, the hilly trek to the foothills of the Alps was the last opportunity for riders without ambition in the general classification to fight for a stage victory.

Skirmishes started nearly immediately after the peloton left the Pont du Gard, a magnificent Roman aqueduct which hosted a stage start for the first time. A group of 33 riders managed to get away from the pack, but teams who missed the break did not give up the chase, ensuring a very fast tempo during the first hour of racing.

With the fugitives’ speed averaging 53 kph (33 mph) and the main contenders for the title determined to save energy, the peloton finally let the breakaway go.

Several top-class riders featured in the break, including eight former stage winners. They collaborated well and opened a lead of more than 14 minutes with 50 kilometers left after a much-welcome shower thoroughly rinsed the peloton on another hot summer day.

The breakaway split when Dutch rider Bauke Mollema accelerated at the front, a move that reduced the leading group to 10 members before Trentin made his move.