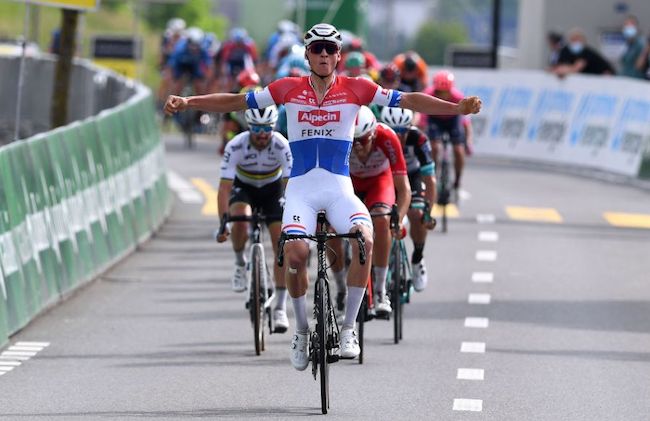 Mathieu van der Poel gave the peloton a demonstration of power on Tuesday, storming to a second straight Tour de Suisse stage win that gave him the overall lead.

You can rewatch STAGE 3 of 2021 Tour de Suisse HERE

The Dutch rider left Julian Alaphilippe trailing in his wake when he made his final dash for the finish line to take another 10 bonus seconds and top spot on the general classification.

Van der Poel and Alaphilippe had made vigorous attempts to shake off the peloton over the final 50km but team Ineos, with on form Rohan Dennis supporting Richard Carapaz, reeled them in.

“I had a good day again,” said Van der Poel, who confirmed he would make his Tour de France debut late in June and contest the Olympic mountain bike event in July.

“I’d like to keep the jersey (overall lead) as long as possible, but in the mountains it’ll be tough,” he said with one fairly flat stage remaining before the business end of the race takes the peloton to altitude.

“I could win tomorrow, everything is possible, and someone has to win right,” Van der Poel said when asked if he could make it a triple on Wednesday.