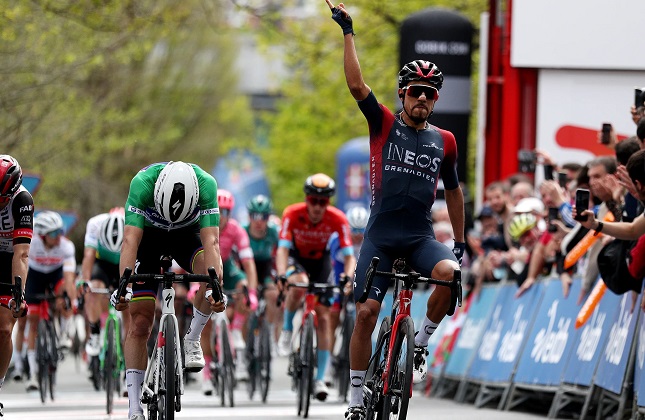 Daniel Martinez launched his sprint early and held off Julian Alaphilippe by the width of a tyre to take the fourth stage of the Tour of the Basque Country on Thursday.

The elite group caught the lone survivor of the breakaway, Victor Lafay, in the final kilometre of a hilly 185.6km ride from Vitoria to Zamudio.

Martinez attacked coming into the final corner on a slightly uphill finish. He held the inside line through the bend and was strong enough to resist Alaphilippe and Diego Ulissi.

“When I saw nobody was going for it before 200 metres to go, I decided to go for it,” said Martinez.

Alaphilippe, who won the second stage, threw his bike at the line but fell a few centimetres short.

“My legs were good but I was just missing a little something,” he said. “My confidence was missing a little, even if I won a couple of days ago, which did me good. But you can’t win every day either.”

Primoz Roglic was fourth to preserve his overall lead. He is four seconds ahead of Remco Evenpoel. Martinez jumped to third, 11 seconds off the lead.

Pierre Latour of TotalEnergies, who started the day ninth 25 seconds off the lead, suffered a nasty crash with 10km to go.

Friday’s penultimate stage is a mountainous 164km ride from Zamudio to Mallabia.

“The next two stages are very hard,” said Martinez. “But together with Adam we’re going well and we’ll be looking for the win.”

This is how @danifmartinez96 sprinted to today's win 🔥🔥🔥

Did you enjoy that one? #itzuliapic.twitter.com/UWG1gpHgx0