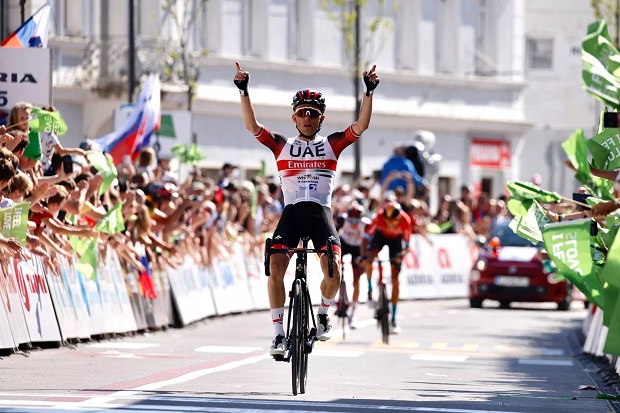 Rafal Majka won the opening stage at Tour of Slovenia, ahead of Domen Novak (Bahrain-Victorious) and teammate Tadej Pogacar.

The trio made the decisive move with 59 km left: an attack by the two-time winner of the Tour de France on the slopes of the Zadlog climb gave life to the trio of attackers, chased for a long time without success by Matej Mohoric (Bahrain-Victorious) and Sean Bennett (China Glory).

In the final, teamwork allowed Majka to take his first win of the season, while Pogacar crossed the line in 3rd place. The first group of pursuers finished the stage 48 seconds behind Majka.

“We were a bit surprised the action kicked off from so far out. On the 2nd category climb, the pace went up a lot and Tadej asked to accelerate, we shelled out the group and then went off on the attack,” said Majka.

“We managed to get to the finish line: it was a long breakaway, but we had good legs thanks to the good training we did in Livigno. I thank the whole team for their trust and support, with a special mention for Tadej: as always, he was the strongest today too, but he told me I could try to win. I am happy with the result, now we will concentrate to look for new stage successes and to support Pogacar in the general classification ”.

What a day for @TeamEmiratesUAE!