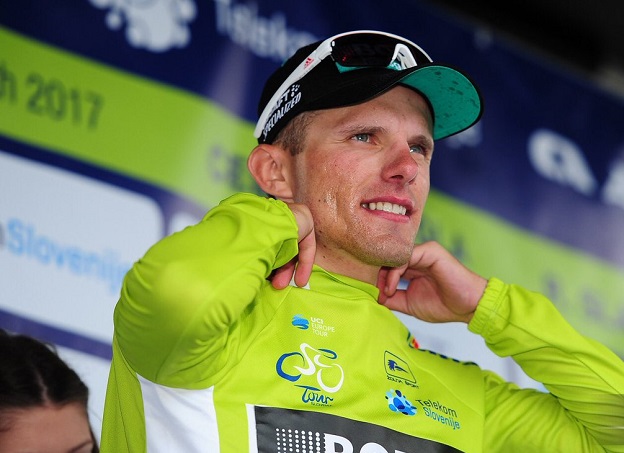 Sam Bennett (Bora-hansgrohe) has won the last stage of the Tour of Slovenia. Teammate Rafal Majka secured the victory in the overall classification.

Opposite to yesterday’s mountain top finish, which saw Rafal Majka taking the stage and the overall lead, today’s last stage was one for the fast men again. The 160 kilometers between Rogaska Slatina and Novo Mesto, was marked bei just one minor KOM and two intermediate sprints.

A leading group went up the road early in the stage. The 6 escapees increased their gap to about 5 minutes, but Bora – hansgrohe was controlling the race in the peloton.

On the last 15k all breakaway riders were caught, as the peloton rode the final on a 5k finishing circuit. Because of the tricky last kilometers, the lead-out trains formed early and battled for the best positions.

Bennett opened the sprint from the front and secured his second stage win ahead of Mark Cavendish (Dimension Data) and Sonny Colbrelli (Bahrain Merida).

“We worked the whole day for the jersey of Rafa, therefore I didn’t have a lot of guys for the sprint today. But Rudi brought us up in the perfect moment, we took the outside on the penultimate corner, to be inside on the last one. On the bridge, we were in front and I did let a little gap to come with full speed out of his slipstream on the last 200m. We can be very proud of the team this week, it was a perfect performance from all of us!”, said Sam Bennett.