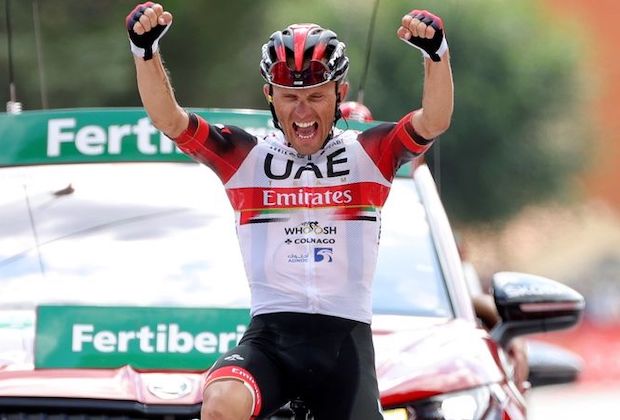 Rafal Majka took the lead at the first of four climbs and held on for an impressive win in the 15th stage of the Vuelta on Sunday, with Odd Christian Eiking keeping the overall lead.

Majka went solo with less than 90 kilometers to go and stayed in control during the rest of the challenging 197.5-kilometer stage between Navalmoral de la Mata and El Barraco. He crossed the finish line 1’27” ahead of Steven Kruijswijk.

“I only thought of one thing,” he said. “I had a bad start to the season and it wasn’t easy for me and my family, especially when my father died. I wanted to win for him, for my kids and for my great team UAE Team Emirates.

“Sometimes you try and it’s not easy to to get in break. But today I tried from the start. I didn’t wait for nobody today, I wanted to win the stage.”

Eiking, who has held the leader’s red jersey since the 10th stage, finished almost three minutes behind Majka, along with the rest of the top contenders in the general classification, including two-time defending Vuelta champion Primoz Roglic.

Riders have their second rest day of the three-week race on Monday. They face a stage that will favor the sprinters on Tuesday, a 180-kilometer route from Laredo to Santa Cruz de Bezana in northern Spain.