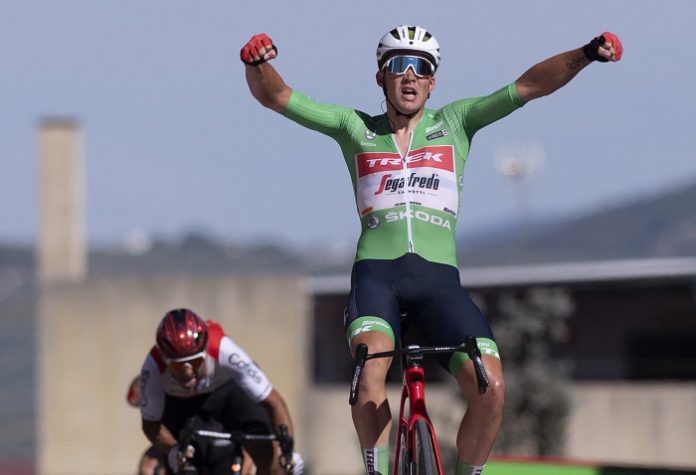 Mads Pedersen tightened his grip on the Vuelta points competition by leaving the other sprinters trailing on Friday as Remco Evenepoel retained his overall race lead.

The 168.4 km run from Ronda to Montilla along flat, winding roads through olive groves ended with an uphill sprint that suited Pedersen.

“We knew the final was super good,” said Pedersen, thanking his Trek teammates for leading him into position for his first stage victory of the Vuelta. “I’m just happy that I could finally get the win and give the boys back for all the work they had done so far.”

“We came here for a stage win and now we have one.”

When Pascal Ackermann attacked out of the last corner, only Pedersen was able to follow. When the Dane surged past, Ackermann sat up.

“Pascal jumped early and it means I could jump with him,” said Pedersen. “It was a long, long straight and to follow Ackerman is also a full sprint so it was a 330m sprint today.”

Pedersen’s win also put daylight between himself and his closest rivals in the points competition. He has 247 points. Marc Soler and Fred Wight of Bahrain are next on 96.

“Super nice to have a comfortable lead in points jersey,” said Pedersen. “It would still have been nice to have Sam here to keep fighting for the jersey.”

Juan Ayuso completed the stage and remained fifth overall despite testing positive or Covid before the start.

“He is asymptomatic and analysing his PCR found he had a very low risk of infectivity, similar to cases such as we saw at this year’s Tour de France,” the team tweeted, quoting their medical director Dr. Adrian Rotunno.

In the Tour, Rafal Majka, also of UAE, was allowed to continue after testing positive because of a low ‘viral load’.

On Saturday, the peloton rides much of the 160.3km stage again on flat before climbing the Sierra de la Pandera at the end.