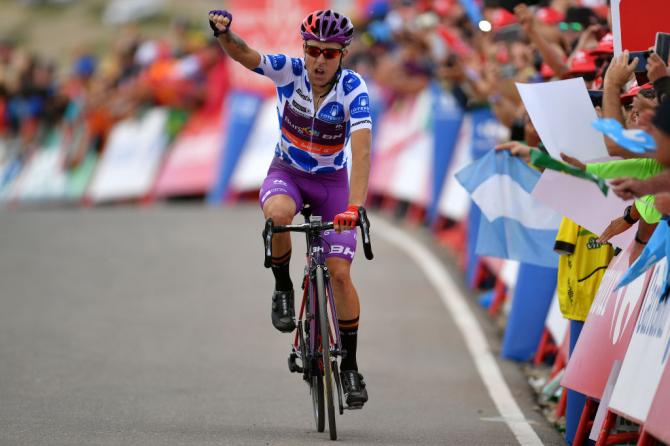 Angel Madrazo (Burgos-BH) proved strongest on the final climb to win the fifth stage of the Vuelta, while Miguel Angel Lopez (Astana) used a late charge to retake the overall lead.

Madrazo took charge in the final 500 meters of the 170-kilometer stage, which ended atop the Alto de Javalambre.

The Spanish rider had stayed near the front throughout the final kilometers in a breakaway group that included teammate Jetse Bol and Jose Herrada (Cofidis).

Madrazo was left behind by Bol and Herrada several times on the final climb. He got back to the front in the last kilometre and left his companions behind to take the mountain victory on his own.

Bol crossed the line in second place, 10 seconds off the lead, with Herrada coming in 12 seconds later.

Lopez finished fourth in the stage, 47 seconds behind Madrazo. Alejandro Valverde (Movistar) was fifth. Lopez and Valverde had been more than six minutes behind the breakaway group entering the final climb but cut most of the gap.

Former race leader Nicolas Roche (Team Sunweb) was unable to follow an earlier attack from Valverde and battled valiantly but was forced to concede defeat.

The general classification is now led by Lopez who is 14 seconds up on Roglic, with Quintana now third at 23 seconds. Valverde is fourth 28 seconds back on the red jersey.