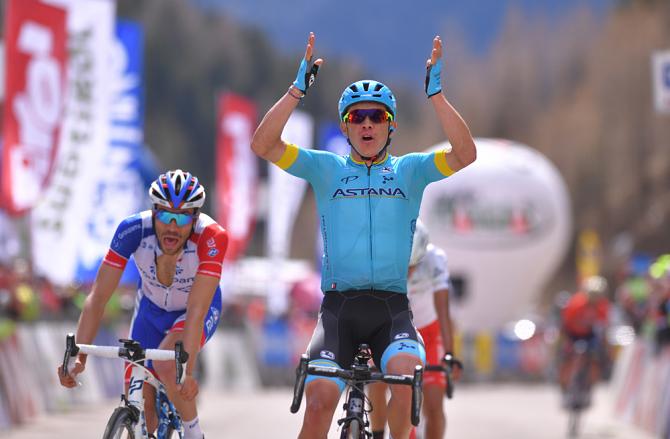 Lopez timed his attack well to pip Thibaut Pinot (Groupama-FDJ) and fellow Colombian Ivan Sosa (Androni-Sidermec) on the line after the 145km ride between Lavarone to the summit finish of l’Alpe di Pampeago.

Froome crossed four seconds behind Lopez as he continues his preparations for next month’s Giro d’Italia.

All four riders were involved in a late dash for the finish line, with the Colombian clinging on over the final metres to come out on top. The victory was the second for the Astana team after Pello Bilbao took the opening stage.

The 20-year-old Sosa takes the overall race lead from Bilbao with Froome moving up from fifth to fourth.

“I think I’m in a great position considering my main objective for this first part of the season is to be ready for the Giro,” said Froome.

“I’m on track for that and I’m happy with how I’m feeling. As a team it was a very good test for us. I’m really happy with how the guys performed, especially Kenny Elissonde in the final. The guys were really impressive today.

“I’m racing as hard as I can and I’m not going to give up just because I came fourth today. There’s still a lot to race for.”

Froome has already finished 10th in the Ruta del Sol and 34th in Tirreno-Adriatico this year and is using the Tour of the Alps as his last warm-up for the Giro d’Italia, which starts on May 4.

Wednesday’s third stage covers 138km from Ora to the the southern Tyrol town of Merano with two difficult climbs along the way and a final summit 25km from the finish.