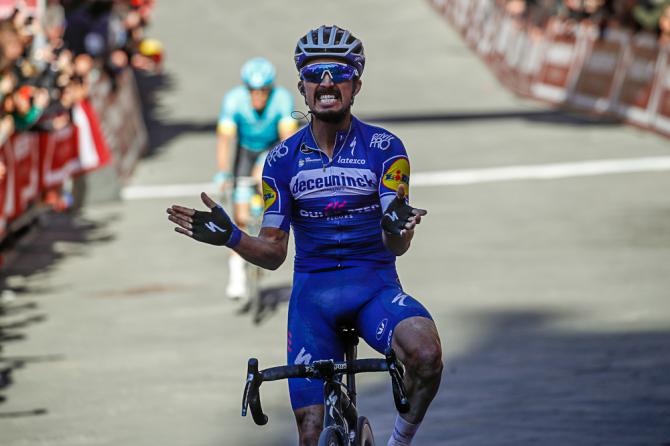 Julian Alaphilippe won the Strade Bianche on his first participation as he beat Jakob Fuglsang (Astana) at the end of a 184-km ride around Siena peppered with gravelled road sections.

The Deceuninck-Quick-Step rider followed Fuglsang’s attack in the penultimate gravelled section and perfectly timed his effort in the narrow streets of Siena to prevail on the Piazza Del Campo.

“I’m just so happy, my team did a great job today. I knew it was a good race for me,” said Alaphilippe, who gave Deceunik-Quick-Step their fourth consecutive win in the 2019 classics after they claimed the Omloop Het Nieuwsblad, Kuurne-Brussel-Kuurne and Le Samyn.

“I just had to make no mistake and I made none, I was in a good day. It was my first big goal of the season.”

“I want to win every race that I start with a winning chance,” said Alaphilippe, who has two Tour de France stages to his name and last year won the race’s mountain classification.

“This is one of the best victories in my career. I thought after breaking my knee at the world championship that I wouldn’t have enough time to get into the right form for winning Strade Bianche,” the Mitchelton-Scott rider said. “But I’m glad it was enough time. I managed to attack exactly where I had planned to.”

You can rewatch Strade Bianche 2019 HERE.