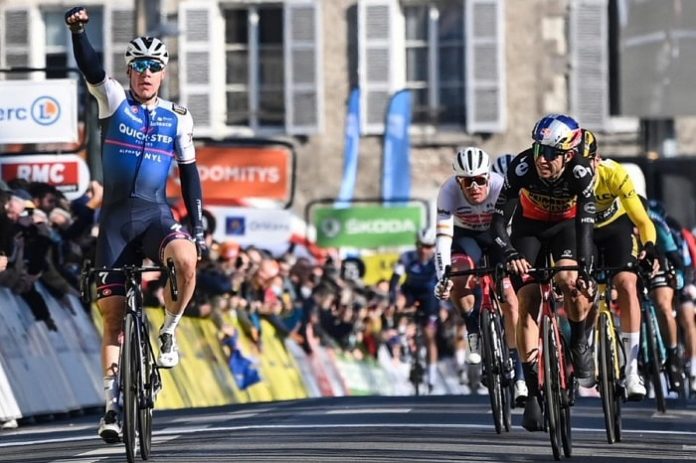 Fabio Jakobsen won a dash to the line on stage two of Paris-Nice at Orleans on Monday, powering clear with perfect timing.

The day’s proceedings over the vast agricultural plains between Paris and Orleans were dominated by winds that caused constant breaks in the peloton.

“My legs are hurting after that but we (Quick-Step) love echelons,” said the winner. “I still had three teammates at the end and that kind of finish, with a slight rise, suits me”.

At the head of a group of around 40 riders Jakobsen was followed over the line by Wout van Aert, and overnight race leader Christophe Laporte, who retained the yellow jersey after his surprise win Sunday.

“It was such a nerve-wracking day. I didn’t really have much time to think about the yellow jersey,” Laporte said.

“I myself launched the sprint for Wout 400m out, but Fabio was just too strong today,” he said.

Race favourite Primoz Roglic appeared at ease, while other potential contenders Adam and Simon Yates, Nairo Quintana and Dani Martinez and Aleksandr Vlasov all finished in the front group.

Defending champion Maximilian Schachmann, however, had a second day to forget dropping over a minute, after also trailing home 45sec behind on Sunday.

Tuesday’s third stage runs 191km over flat terrain from Vierzon, made famous by the Jacques Brel song Vesoul, and Dun-Le-Palestel.