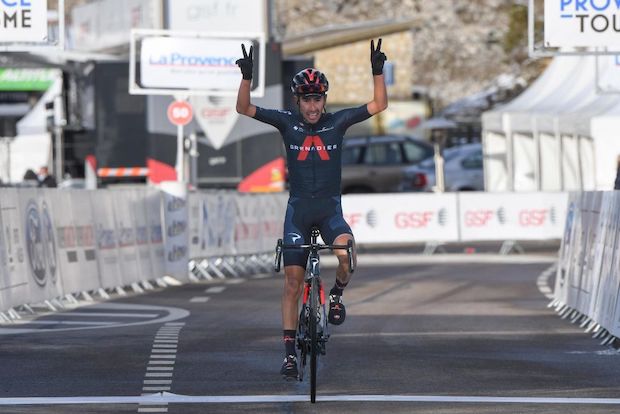 Sosa timed his attack to perfection with just under five kilometres of the challenging finish in Chalet Reynard remaining. None of other General Classification contenders were able to follow his initial move, which had been setup by Eddie Dunbar and Carlos Rodriguez pushing the pace on the front of the bunch to catch the break and then stretch a thinning peloton.

As Sosa’s lead extended to nearly 20 seconds, Julian Alaphilippe was the first to attempt to catch the Colombian, though his move was marked by Bernal.

Bernal then attacked the world champion in the final few metres to take second on the stage once Sosa had sealed the victory to take the overall race lead.

“It was a pretty difficult stage, the strategy was for Egan or I to attack. I think between us we played it well”, said Sosa. “The team worked hard and how it ended we can be really happy. The plan was to hit the climb at a good pace and leave it reasonably late to attack. The team feels really strong at the moment.

“It’s a beautiful climb, but a hard one! It’s really a beautiful way to start the season like this, and helps with the motivation to work hard for the rest of the year.”