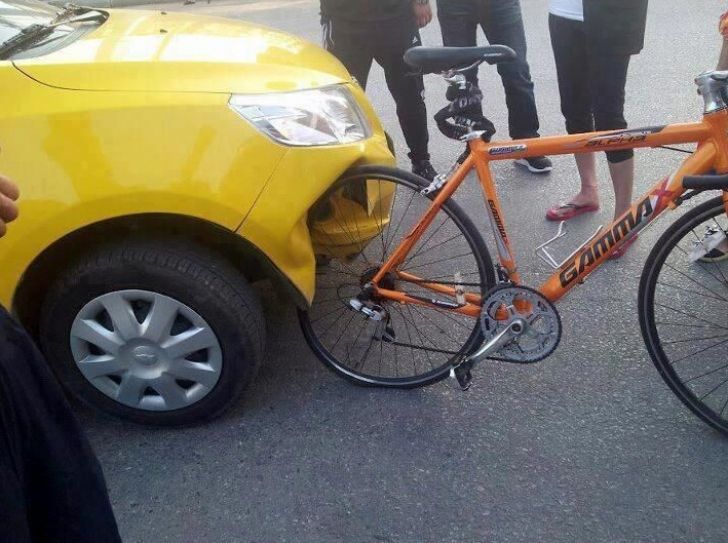 We hope you never need this info, but many cyclists aren’t so lucky.

According to the US National Highway Traffic Safety Administration’s last year saw an estimated 48,000 cyclists injured as a result of motor vehicle collisions. Here’s your step-by-step guide for protecting yourself if you wind up on the wrong side of a bumper.

Stay Down
If you’re knocked off your bike, your first inclination may be to be to pop back up. “Your adrenaline’s pumping so you might be like, oh, I’m fine,” says Sally Morin, a San Francisco lawyer (and daily bike commuter) who deals with many bike-car crash cases.

Don’t do it: You might end up hurting yourself further. Pro road cyclist Lucas Euser says that most of his colleagues have a mental checklist they go through post-impact. “It’s this internal assessment of body parts and ‘what can I or can’t I move,’” he explains.

Brant Slomovic, MD, a Toronto-based emergency medicine specialist, recognizes that it can be hard to tell whether you’re seriously injured. However, he says Euser’s checklist isn’t a bad idea: “If [there is] no immediate neck pain, no numbness to extremities, the impact was at low speed, and there are no obvious limb deformities, I think it’s okay to attempt to get up and walk it off.” If you can’t get up—or something clearly isn’t moving—stay where you are and have someone call 911.

Record Everything with Your Phone
If you or the driver is injured in any way, you need to call the police and maybe request an ambulance. But even if both of you are fine, Morin says you should still have your phone handy. “I recommend people take a quick picture of the car’s license plate,” she says, adding that, more than once, she’s heard of a driver going to “get their registration” and actually hopping in their car and speeding away. She also recommends videoing any apologies you get from the driver, as sometimes stories change once drivers realize they could be on the hook for major damages.

Justin McNaull—a former police officer, longtime bike commuter, and current employee of eDriving.com, the nation’s largest online driver’s education provider—says that you should also snap as many photos of the accident scene as possible. “The guidance used to be not to move your vehicle until police arrived,” he says. “Increasingly, police and transportation officials want drivers involved in minor fender benders to get their vehicles out of the roadway to reduce congestion and chances for additional wrecks.” Document where the car and bike ended up, as well as any skid marks on the road, then move to safety.

Morin says that if you do get video of being hit by a car, or of the crash scene, it’s important to turn it over to police or to your lawyer as soon as possible. Cyclists in several cases have successfully used video evidence, but “chain of custody of the video is very important,” says Morin. Basically, you want to eliminate any chance of the other party claiming the footage was tampered with.

Exchange Info
Get all of the same info you’d get in a car-on-car collision, says McNaull. That includes the driver’s full name, phone number, home address, email address, and insurance company and policy number. You’ll also want to jot down the make and model of the car, and the license plate number.

Seek Medical Attention
If you’re at all concerned you may have sustained an injury—even a minor one—get a professional involved. Morin says if you don’t declare your injuries quickly, you may lose the ability to file an insurance claim. How long you have for claiming an injury can depend on your insurance policy; Morin says it’s generally about a year, but it’s best to read your policy to be sure. The time period for declaring an injury on the other party’s insurance varies by state.

And yes, you probably do want to contact your own auto insurance provider if you have one, even though you weren’t actually in your car. “You don’t have to, but you might want to,” says Morin. “Sometimes that insurance can cover you as a cyclist or pedestrian, especially if you have an uninsured or underinsured motorist policy.”

Get Back on Your Bike
It’s okay if being hit by a car changes how you approach riding—just don’t let it turn you into a non-rider. Euser says his accident made him ride much more defensively: He’s stopped wearing headphones, and takes fewer chances with his training—even if it means posting slower Strava times. What he hasn’t let it do is deplete his passion for the sport. As soon as he was cleared to ride (and possibly a little before; don’t tell his doctors), he was on the road again. You should be too—though maybe wait until your doctor says it’s okay.