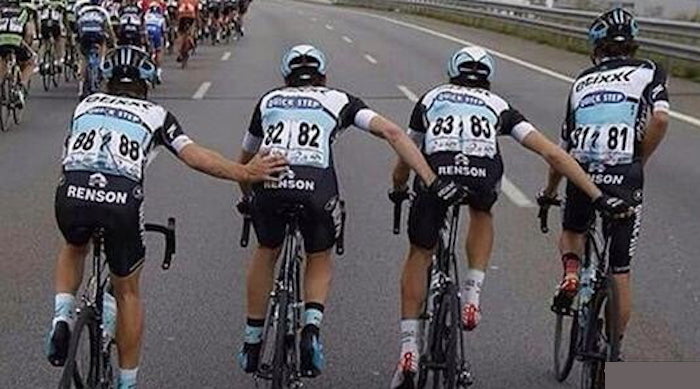 The pro cyclists in the ride over 150 kilometers almost every day, climb mountains, descend at warp speed down twisty pavement, and finish it all off with a furious sprint. And all those kilometers necessitate proper hydration, which necessitates proper…elimination. So how does one relieve himself in tight spandex without dropping in the standings?

“It’s different for every rider,” says Mark Cavendish. “Some riders maybe take two, three, four pisses during the race. I go right at the beginning of the stage.”

The act of peeing while riding is a challenge for most athletes and can take some practice. It works for some, but doesn’t work for others. If you choose this option, be mindful of other racers around you.

Other options include stopping at a port-a-potty or stopping to pee in your tri shorts. Use water from your water bottle to wash off. While training, figure out which strategy works for you so you can be prepared on race day.

“People have different ways,” Cavendish says. “Some guys lift up their shorts and go. Normally, if you’re on a slight downhill, you can kind of just move to the side of the group and continue while you do it on the bike. Or you can get a teammate to push you.”

“I’ve never been able to pee off the bike,” Greg LeMond says. “I always found a tree.” But you can’t simply pull off to the side of the road. There are tactics involved in watering that tree. “You go to the front of the pack,” he says. “And hopefully you tell everybody you’re peeing so they don’t attack.”