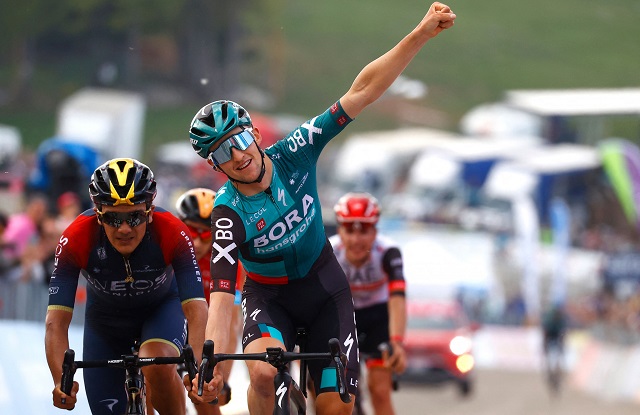 You can rewatch STAGE 9 HERE

Hindley edged Romain Bardet, Richard Carapaz and Mikel Landa to the line, while Simon Yates lost over 11 minutes on the final, steep 14km climb to Blockhaus, in the Abruzzo region.

With the Giro heading into a rest day on Monday, Lopez leads Joao Almeida by 11s with Bardet at 14s, Carapaz 15s, Hindley 20s and Landa 29s adrift.

Ineos team set the pace on this ninth stage where the riders got to the Blockhaus mountain after five sizzling hours in the saddle for a 13.6km test at 8.4 percent gradient.

The peloton was whittled down finally to six riders coming to the summit and a photo-finiah was needed to separate winner Hindley from Carapaz in second and Bardet third on the day.

“There was a right hander before the finish with around 200m to go. I wanted to take the corner first and gave it everything to the line – and here we are,” Hindley explained at the line.

Simon Yates was in trouble even before the climb and it may now appear that his day three time-trial win in Budapest was an unwise manouevre.