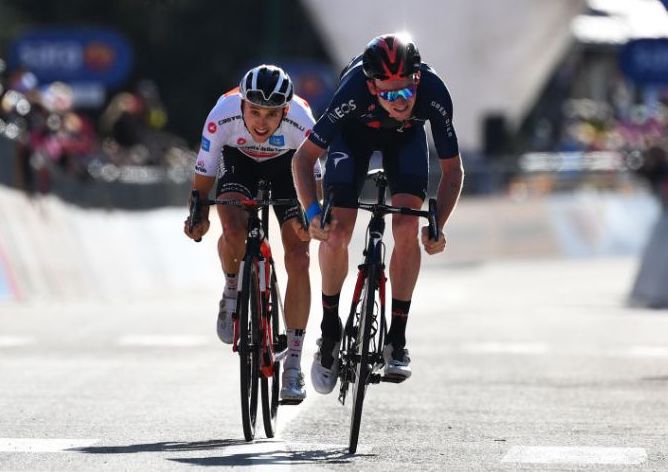 Jai Hindley took the overall lead of the Giro d’Italia on the penultimate day but has less than a one-second advantage over stage 20 winner Tao Geoghegan Hart, setting the race up for a nail-biting finale on Sunday.

Hindley narrowly lost to Geoghegan Hart on Saturday, but he leads the Briton by 0.86 second ahead of the final time trial, which is expected to favour the Ineos-Grenadiers rider.

Hindley’s Sunweb team mate Wilco Kelderman, who started the 190-km ride from Alba in the race leader’s Maglia Rosa jersey, finished 1:35 behind and now lies 1:32 off the pace after dropping out when Geoghegan Hart’s team mate Rohan Dennis set a high tempo in the first ascent to Sestriere.

Joao Almeida, who lost the overall lead on the 18th stage across the snow-covered Stelvio pass on Thursday, attacked from the group of chasers that featured Kelderman and Vincenzo Nibali in the finale, to end the stage in fourth place behind Dennis.

The stage had been due to go through the punishing Col d’Agnel and Col d’Izoard in France, but restrictions due to the COVID-19 crisis meant the organisers were forced to change the route and have the peloton climb up to Sestriere twice.

Kelderman and most of the big guns were dropped in the first ascent to the ski resort as Dennis accelerated, taking Geoghegan Hart and Hindley in his slipstream.

The Dutchman was hovering 40 seconds behind at the top and lost even more time on the last ascent, where Hindley attacked repeatedly but failed to drop Geoghegan Hart.

Sunday’s time trial is a 15.7-km effort from Cernusco sul Naviglio to Milan.