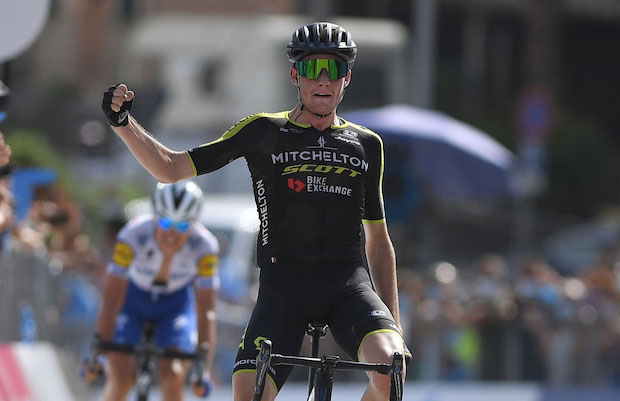 Lucas Hamilton comfortably won a two-man sprint to claim victory in the fourth stage of the Tirreno-Adriatico, while Geraint Thomas remained in contention for the overall victory in the eight-day race.

Michael Woods crossed third in the 194-kilometer route through the hills of Umbria and earned a five-second bonus to increase his overall lead.

Hamilton, who rides for the Mitchelton-Scott team, attacked on the high-speed descent to the finish and was quickly joined by Fausto Masnada.

Hamilton began his sprint 100 meters from the finish and easily beat Fausto Masnada.

“I tried to stay with the strongest riders on the final climb, then I was lucky I was with Masnada on the final attack,” Hamilton said. “I could have not made it alone. It was a good day. Simon (Yates) remains the leader for the GC.”

Masnada crossed with the same time as Hamilton, then Woods finished 10 seconds behind to lead a small group of elite riders chasing overall victory.

In the overall standings, Woods leads Rafal Majka by 9 seconds, with Masnada third, 18 seconds back.

“Really hard stage but the team was very strong. A difficult day, just like yesterday and probably tomorrow,” said Woods. “There are so many strong riders here, I am happy to keep the jersey another day.”

Hamilton moved up to fourth overall, 27 seconds behind, while Thomas dropped a couple spots to sixth, 34 seconds back.

While Thomas remained with the other overall favorites to the finish, Ineos teammate Chris Froome again struggled as he rides his way back into form.

Froome, who dropped behind on the grueling climb to Forca di Gualdo, finished nearly 10 minutes behind.

Stage 5 on Friday is another climbing stage with an uphill finish to Sarnano Sassotetto.