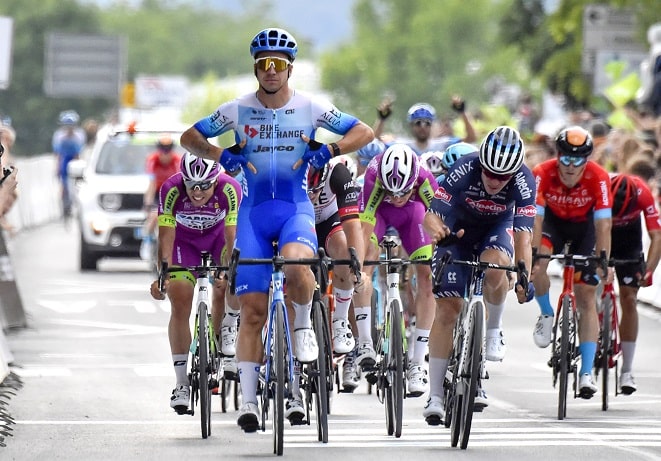 Dylan Groenewegen won the second stage of the Tour of Slovenia after a powerful sprint finish.

The 174.1km stage from Ptuj to Rogaška Slatina was far from the straightforward day many riders would have been expecting, as despite the expected bunch sprint finish materialising, it was a lumpy day with some demanding climbing which took its toll on Tim Merlier.

After an early six-rider breakaway was reeled back in with under 40km to go, a select lead group formed as the peloton split under increasing pressure.

Groenewegen and his team-mates made the lead group of around 40 riders, setting the Dutchman up well for an attempt at victory.

It was Groenewegen’s fifth win of the season in BikeExchange-Jayco colours.

“We timed it really well. Into the final corner I was a bit boxed in, so that was hard, I couldn’t follow Luka in that corner and he had to wait before pulling again, so that was really hard for him, also for Campbell,” said Groenewegen.

“It wasn’t perfect, but Luka made a really smart move to make some space for me, and I could follow the other riders and find some space to sprint, and that was enough.”

“We did a lap before so we saw the finish and knew what was coming. The guys did an amazing job all day, especially when Bahrain started pulling in the climbing zone. It was a really hard stage so thanks to my team-mates for this victory.”