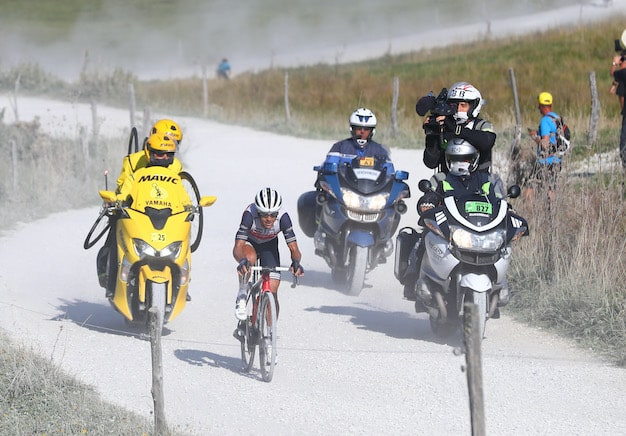 This year’s Giro d’Italia begins in Turin on May 8 and will take in some signature highlights including Monte Zoncolan and the increasingly popular white gravel Strade Bianchi roads.

The 104th edition honors the 160th anniversary of Italy’s unification, and ends in Milan on May 30, returning to its traditional time slot after the 2020 edition took place in October.

The course is light on time trials – two individual TTs on the first and last days at a total of 38.5 kilometers – which will please the elite climbers such as Egan Bernal, Thibaut Pinot and Romain Bardet, with the mountains looming large in the second half of the race.

Bernal, Bardet and Pinot had already earmarked the Giro in favor of the 2021 Tour de France, which is heavy on time trials. Conversely, 2020 Giro champion Tao Geoghegan Hart will miss this year’s race and make his Tour debut.

The 30-year-old Pinot described the course as mouthwatering.

“That’s a Giro for a climber,” he said. “It’s motivating and I’m targeting being at 100 percent for it and it’s my objective for the season.”

The 2019 Tour de France winner Bernal has long expressed his desire to race the Giro. He certainly sounded cheerful on Wednesday.

“I can’t wait, it’s a beautiful Giro,” he said, adding he had already begun his recon rides.

The first week of the Giro is devoted to the sprint south to the Puglia coast but loops back towards the heart of Umbria without hitting the deep south that hosted a series of stages last year.

After the first rest comes a big test with 35 kilometers of Tuscan “Strade Bianche” – unpaved roads – during the last 70 kilometers to Montalcino, one of the great wine sites of the peninsula.

The riders will need to take on Zoncolan, one of the hardest climbs in Europe, at the end of the second week, two days before the queen stage of the Dolomites, scheduled for May 24. A trio of great historic passes – Fedaia, Pordoi, Giau – will begin that stage leading to Cortina d’Ampezzo.

The third week takes the riders back to the north of the country and includes a testing sidestep into Switzerland to climb the Passo di San Bernardino and the Splugenpass.