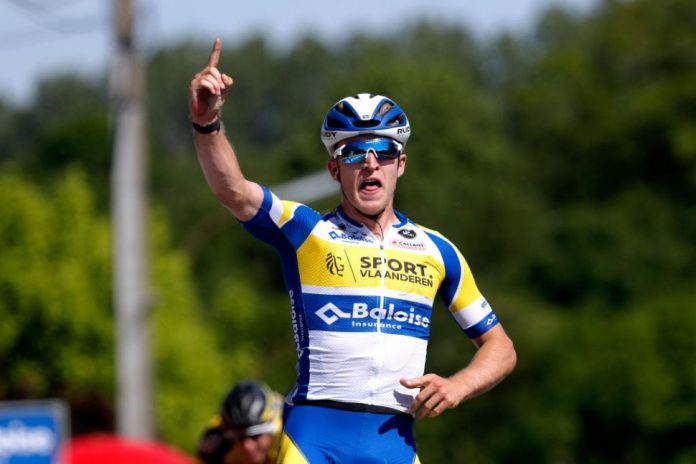 Robbe Ghys won the opening stage of the Belgium Tour after he was the strongest sprinter of a group of three at the end of a 175 kilometre stage from Beveren to Maarkedal. Remco Evenepoel came in second, but took the overall lead.

You can rewatch STAGE 1 of 2021 Belgium Tour HERE

During the second passage over Berg ten Houte, the race exploded. At the initiative of Remco Evenepoel a chasing group was formed, including Victor Campenaerts and Ide Schelling. Two laps before the finish, Evenepoel again put in an attack. After this new acceleration, only Campenaerts could follow.

Ghys and Van Schip were the only survivors at the head of the race form the breakaway. During the climb of the Ellestraat, with 22 kilometres to go, Evenepoel and Campenaerts joined the two leaders. In the peloton, Philippe Gilbert started to chase the Evenepoel group with Davide Ballerini. Ballerini gave up and was soon followed by Gilbert.

At the front of the race, Van Schip had been replaced by Marchand. The three escapees were happy that they could follow the wheel of Evenepoel. Evenepoel took the full 9 bonus seconds at the Golden Kilometre. The lead of the Evenepoel group had grown to 30 seconds with 10 kilometres to go.

At the head of the chasing peloton, Alpecin-Fenix ​​tried to reduce the difference for Jasper Philipsen. Campenaerts had to drop out due to cramp. Early escapees Ghys and Marchard bravely held onto Evenepoel’s wheel over the last climb of Berg Ten Houte, the battle for the stage victory would be between the three.

Philippe Gilbert tried to make the crossing from behind, but came too late. Marchand was the first to start the sprint, but was caught by Evenepoel. Ghys had the strongest final sprint. Ghys, who will soon be at the Olympic Games in Tokyo, recorded his first road victory in his career. Due to the bonuses, Evenepoel will wear the leader’s jersey in the 11.2. kilometre time trial in Knokke-Heist.

“Today was a very hot and hard stage, with some technical and nervous local laps where the race came to life and where you didn’t have any proper moment of respite”, said Evenepoel. “The team did a great job and I am grateful to them, as we were in the right place at the right moment. When we saw there were some splits and that the others were suffering, we decided to do something, so I attacked and it worked out well. The goal was to gain as much time as possible on the chasers and we can be content with the way it panned out, as it’s a perfect start for us.”