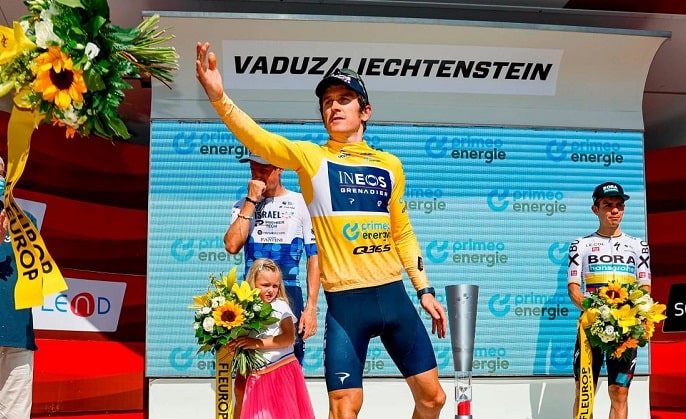 Geraint Thomas tuned up for Tour de France with overall victory in the Tour de Suisse after Sunday’s eighth and final stage.

The 36-year-old rider sealed victory after the 25.6 km time trial in Liechtenstein, won by Remco Evenepoel.

Thomas finished second three seconds behind the stage 8 winner to snatch victory from Sergio Higuita who had started the day wearing the leader’s yellow jersey.

“It’s super nice obviously to win here. I hadn’t been back here since 2015,” said Thomas who finished second in the race seven years ago. “I lost the jersey by a few seconds, so it’s nice to come back to this race and win it.

“It’s kind of revenge. It was a difficult race. You had to be consistent all week. So I’m really very satisfied.

“We lost Adam Yates at the start of the week. I had to take the reins of the team. It is a great satisfaction for me.”

Geraint Thomas follows on from his wins in stage races including both the Tour de France and Critérium du Dauphiné in 2018, the Paris-Nice in 2016 and the the Tour de Romandie in 2021.

“It’s been a difficult week for me, with ups and downs,” said Evenepoel.”But the last few days I’ve felt good. I’ve regained my form a bit.

“We made a few management mistakes during this week which somewhat hit the general ambitions. But I had decided in my head to go ahead and concentrate on the time trial.

“That’s what we did today, because we thought that I was able to win it. But I was no longer sure of myself when I saw Geraint in the last corner. Finally, I was able to maintain a few seconds advantage.

“It’s good to finish this Tour de Suisse with this victory.”