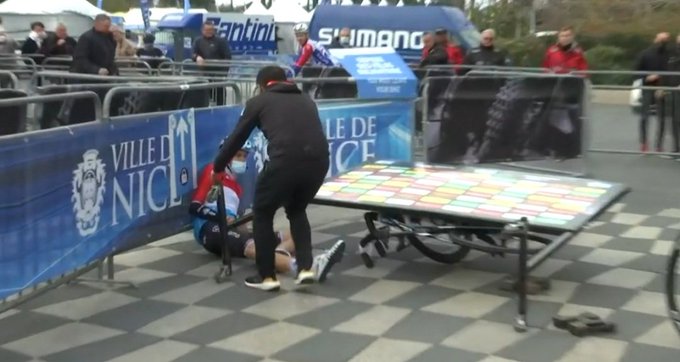 Kevin Geniets did not start stage 7 of Paris-Nice after being hit by a sponsorship panel at the start area in Nice.

As seen in the video below, a gust of wind blew down a sponsorship panel at the start interview area and took down Geniets who happened to be riding behind it at the time, taking him down into the ground and against a barrier.

The Groupama-FDJ rider reported pain to the ankle, and although he got up and took to the start of the stage, he abandoned inside of the neutral zone due to the pain.

“A panel from the mixed zone fell on Kevin Geniets before the seventh stage of Paris-Nice,” his Groupama-FDJ team reported. “He took the start after a hit to the ankle but was forced to abandon after a few kilometres.”

Kevin Geniets had to abandon Paris-Nice because of this… 🤐 pic.twitter.com/hHU5slIr2n